(I know I'm lagging on the entries here, but I promise I won't do anything interesting in the UK until the blog's caught up. Just hold your horses.)

A quick quiz:
Is the currency of Laos:
A) the Glob
B) the Kip
C) the Bag

The difference between Thai and Lao culture is surprisingly profound. 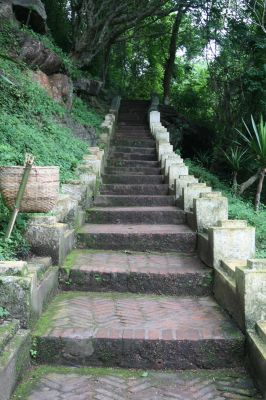 Rubbish bin in Luang Prabang
This is a picture of a public rubbish bin - Lao style. Laos is a former French colony, so everything is tinged with a Western flavour. In LP there are rubbish bins, but (as shown) they're made of woven flax and bamboo poles. Western infrastructure, but with a south-east asian slant. This extends to the food (restaurants selling schnitzel, crepes, etc), most people speak English, and life moves at a slow pace. 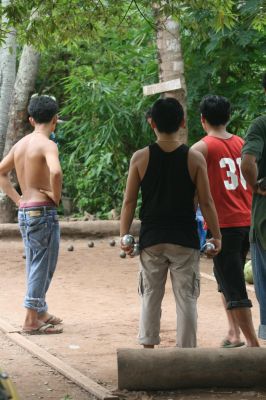 Laotians play boules (or petanque) on the waterfront
Thailand, by contrast, has always been more or less independent. There don't seem to be any rubbish bins at all, dented vehicles fly around at insane speeds, no one speaks much English; it's a country where frantic chaos reigns. If you travel to Thailand and find it too much, try a jump to Laos. It's much easier for a Westerner to cope with.

When you have that quantity of currency, it's easy to go a little silly. I don't normally believe in buying souvenirs, but I was buying all sorts of stupid stuff. 50,000 kip for a bracelet from some cute kid? Sure, why not. I'm a gajillionaire! 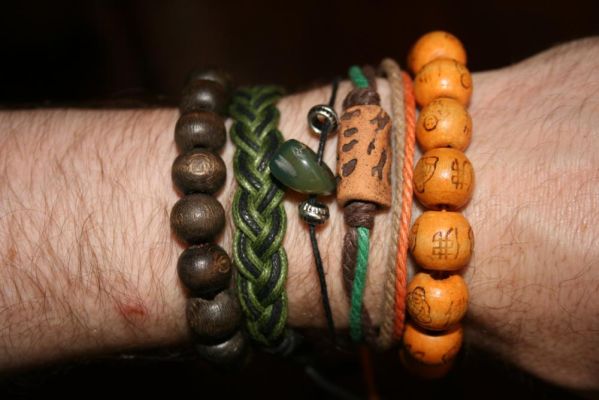