Another quick quiz. Is this pagoda in: 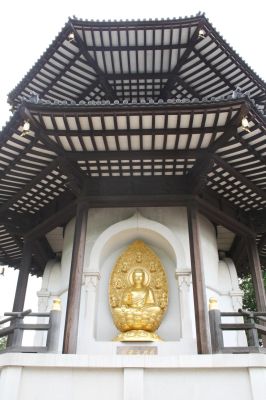 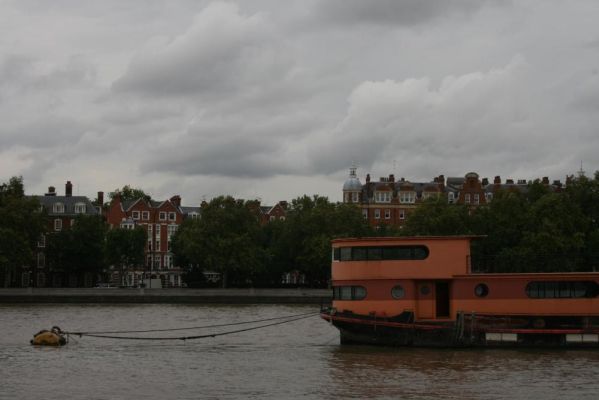 Side view from Peace Pagoda: Barge/Thames/Chelsea

You've probably noticed that the blog peters out a bit after south East Asia. This is a pretty long post to make up for it.

I spent a little over 2 weeks sleeping on the living room floor of my friend D. He got married on Saturday, so I moved out on Friday. He, his partner T, and their flatmates were extremely tolerant of my imposition. The list of people that I owe big favours to is pretty long now.

I've just moved to my own room in the north of the city. D's flat is in Clapham (south west), which is apparently the baby capital of Britain. I have no difficulty believing that, as Clapham's high street was crawling with swollen-bellied women berating toddlers.

In NZ, I'm essentially a tee-totaller. I've been here just over 2 weeks and in 2 drinking sessions I've had 5 sambucas, 2 tequilas, 3 champagnes, and some revolting thing with gin. Mum/Dad: If you could send over my spare liver, that would be great.

Before I came here, a lot of people commented that the weather in Britain can be a little depressing. I don't think so, and here's why: I don't believe that the 2 hemispheres have reversed seasons. The weather here right now is about the same as the weather back home. As long as this is the middle of Winter in England, it's pretty much what I'm used to. Seriously, this can't be late summer, because it's an absolute pig!

We had a running joke at my previous job that everywhere I visited was struck by calamity. Laos had its flooding, Thailand is now a no-go zone for tourists because of political rioting, and England is being swept by floods. My bad.

I've been focusing on the job hunt, so I haven't really done much touristy stuff yet. Shortly after arriving, I went to the plaster casts room at the Victoria and Albert Museum. In Victorian times, they would go to great features around the world, and make gigantic plaster copies of them. They would them paint them to look like the originals. If you ignore the (admittedly major) fact that it's fake, the 30m copy of Trajan's Column that they have in the V&A is now superior, because polution in Rome has robbed the original of a lot a detail.

In one case, the plaque beside the cast points out that the exhibit was modified from its original appearance by one of the plaster artists who thought that it should look better. That is such a Victorian British thing to do. I love that. They're not just showing copies of wonders from around the world; in some cases they're showing how they think it should've been done.

Riding the tube is really expensive (and Boris has just announced that he's raising the fares). A weekly pass just for the inner zones (1&2) is 25 pounds. Clapham isn't too far from the City, and if you have limited funds and a lot of free time, you can walk there in maybe 2 hours. I walked right past Ricky Gervais on Westminster Bridge. Everyone else in the throng was Italian or French, so nobody else seemed to notice him. In my first week, the list of celebrities I'd seen (Ricky) was better than D's after 6 years.

I roamed around Chelsea and Kensington. Chelsea is nice - I could live there (checks wallet) 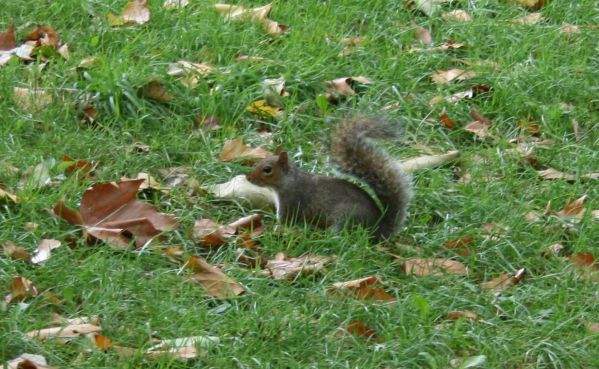