Okay, I haven't posted for a while. Here's a catchup:

No word on my job, and I'm down to my last choclate eclair sweet. It's still stressful.

I've spent the last 2 Saturdays in London. One of the books that I brought with me from NZ was "Barnaby Rudge" by Charles Dickens. I wouldn't have believed it's possible to write a novel this boring about religious riots that burned swaths of London in the 18th century, but Dickens managed it. And to boot, it's just lazy. Every Catholic character is pure and industrious, while every Protestant is either evil or a moron. Awful book. But it did get me interested in the Tyburn Tree. The TT is the site where the gallows were located in London. 50,000 people were hanged there. That's FIFTY THOUSAND. I went to the site by the corner of Hyde Park - there's nothing there. Not even a plaque. It seems like it should be important to me.

While I was there, I walked through Marble Arch. Nothing happened, so I walked back through. Still nothing. It's against the law for the general public to pass under the Arch - only members of the royal family are allowed to. Anarchy in the UK, oi!

I generally read classic literature. (Pretentious, watashi?) But since I've been here I've read Barnaby Rudge (awful), Alice in Wonderland (worse), and the short stories of Edgar Allan Poe (unimaginably bad - unfinishable). The classics weren't cutting it, so I decided to catch up on some more modern novels. I'm a pretty slow reader, but I read "Girl with a Pearl Earring" in a weekend. Fantastic. It got me interested in Vermeer (the artist it's about). He only painted a few works in his life (I don't want to boast, but I once painted a fence in a single afternoon), but one of them is at the National Gallery in London. So, after seeing the traffic island that is entirely un-gallowsy, I wandered through driving rain in Mayfair and Soho to the gallery. To be honest, in the end the Vermeer didn't blow me away, nor did the Carravagios, despite the fact that he inspired many of the Dutch masters. But the Canalettos were great and I found a Camille Pissarro of Montmatre Boulevard at night that is my new favourite Impressionist painting. Overall, it's just so great. It's a gallery that has so many paintings that you end up begging "Please, no more" long before you've seen everything. My only complaint is that last time I was there, I was most taken by the collection of Hieronymus Bosch paintings, but this time they were gone. I guess they're on tour.

Having not learned my lesson, I slipped next door to the National Portrait Gallery. Meh. It's just a novelty compared to the Nat Gal. The Chandos Shakespeare is interesting only for its historical significance, not its artistic merits.

This Saturday, I went back to London. This time I headed to the church St George's Bloomsbury. I think it's the only Nicholas Hawksmoor church that survived the Blitz. They've just cleaned it for the first time since 1730, and it's shining white. I think it's possible, even for an atheist, to appreciate the beauty created in God's name from a post-Darwinian humanist perspective. Beautiful place.

I then caught up with D, who I stayed with when I arrived in London. We had lunch in Chinatown, and then met some friends to see Spamalot in the West End. We then had a curry in Soho for tea and caught the end of the rugby at a pub. It was a really good day out. It was probably also a good idea to be away from the flat for the game. It seems that the Irish didn't find the Umaga spear tackle on O'Driscole as funny as we did.

I'm currently reading "White Teeth". I guess that means I'll be visiting Cricklewood next. I hear it's beautiful.

Due to the trips to London, "Savevember" has become "Spendvember". Oh well, at least the month still has a theme.

Okay, here's some pretty crappy photos from my street. I took a bunch at dusk on Sunday, but I can't do the extended time shots properly without a tripout - the camera shakes in my hand. My tripod is 20,000km away, and I can't remember if it's in the wardrobe or in the garage. Probably not worth me going and getting it. Anyway, I call these "Study in Bloody Cold (I)": 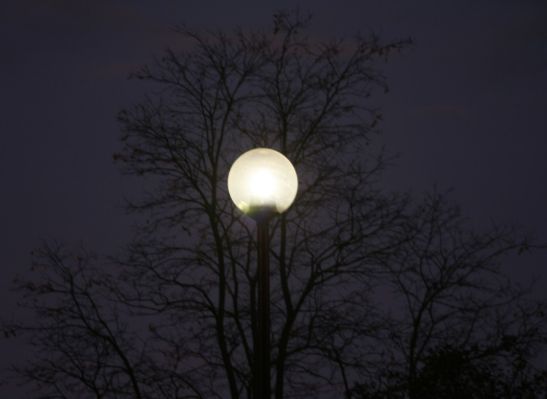 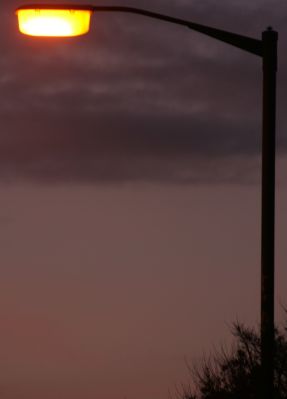