Shivering in a Winter Wonderland

There are so many exciting locales around here: Iceland, the Arctic, the North Sea. Of course, I've never been to any of them, but I have experienced their cold weather fronts. The current one comes from Russia, and as you may've seen on the news, it's given England the heaviest snow dump in 18 years. The snow on Monday was heavier, but my camera had a flat battery. I'm hoping the snow falls again at the weekend so I can get some pictures in town.

I'll probably walk to work today...
When the best part of the forcast for the next 5 days is for a bit of sun mixed in with the snow on Saturday, that says it all, doesn't it? 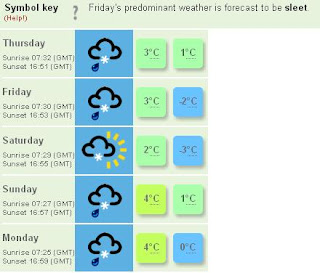 Speaking of Iceland... The Icelandic banks were offering some great interest rates, so many English (including numerous councils) had invested with them. When the banking system began to wobble, England used anti-terrorist legislation to seize the money still in England, thus ensuring the collapse and nationalisation of the 3 Icelandic banks. This left the Icelandic people owing hundreds of thousands of dollars each. I haven't heard much discussion about this here, but I found a really interesting article that AA Gill has written about it: