It was a scorcher of a weekend, so I decided not to do a bike trip. Instead, I went to Hampton Court Place in south London. 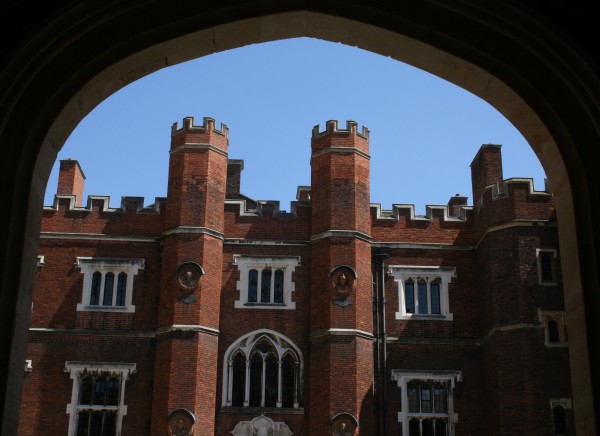 Hampton Court Palace was originally built by Henry VIII's chief strategist Cardinal Wolsey, but after his fall from grace he was compelled to gift it to Henry. It was later the palace of William and Mary and several of the Georges, so there are a number of appartments from different ages you can visit.

The Cartoon Gallery was designed by Christopher Wren for Willam and Mary. It originally contained Rapheal cartoons, but Victoria gave them to the V&A museum, so they now contain 17th century copies.

Cartoon Gallery
This was Henry VIII's hall. All of his 6 wives visited HCP, and he married one of them here (Catherine Parr, I think).

One of the ornate ceilings in the Georgian section:

History lesson time: Normally, a monarch's spouse is only the consort - they cannot rule. Prince Phillip, for example is only "prince" consort. He is not the King. But, uniquely, William III and Mary II were joint rulers. They were protestants brought over to replace the catholic James II, who legged it after the near bloodless Glorious Revolution. Obviously, this meant William had numerous enemies (sore losers), so the King's Guard Room had 3000 weapons arranged on the walls.

A couple of the stain glass windows:

So there you go: Not a bad day out, but pretty expensive (14 pounds to get in). My biggest complaint is that you get a free information headset to listen to, but few of the rooms have a number in them, so you don't actually get a lot of opportunity to listen to it. Still, Hampton is a lot more impressive than the Kew Palace that I saw a couple of weeks ago.

As I walked across London, I stopped at the St Pancras Church on Euston Rd, not too far from King's Cross. It has caryatid columns, which I don't have to tell you are Greek sculpted female figures that form a structural support. The caryatids at St Pancras are based on those at the Erechtheum, on the Acropolis. This interested me, because 2 weekends ago I went to a little-known museum in Cambridge called the Museum of Classical Archeology. This is one of the only museums left that still has Victorian plaster casts of classical sculptures. It's just closing for a year of renovations (that's an English year of renovations, which equates to 3 or 4 years by any other measure). But it's a rip snorter of a visit. It has a plaster cast of one of the original Erechtheum caryatids.

The British Museum also has one of the original Erechtheum carytids, because when were the Brits ever satisfied with just making a copy of something priceless and then buggering off?

Anyway, these St Pancras ones were apparently built a little tall, so they had to be cut down at the waist.


In another hark back to a previous post, I wanted to show you something. Do you remember that I really want to see a Banksy stencil? I haven't found one in the wild in London, but there's this on the wall of a video shop I pass on the way to the rail station in Cambridge:

The red TV is the logo of the video shop. The original Banksy would've had the little girl losing a balloon. So, either this is an actual Banksy that has been modified by the shop to its own end, or they created a fake Banksy on their wall. I like to think that I've seen a real Banksy - and not that far from my flat.
Posted by James at 3:01 PM