So that was about it for the cycle tour. The final morning in Ypres I got up early, packed up, and biked like a madman south to Lille. As soon as I crossed the border into France, people began cheerfully calling out "Bonjour!" to me as I cycled past. A very different attitude to the Dutch/Flemish.

I made it to Lille with time to spare, but the idiot woman at the ticket office wouldn't let me book in my bike, as their website specifies. She tried to make me buy a new ticket for a different train - she clearly didn't know their own rules. I did my best to argue with her in French, but my high school French teachers never taught me how to say "you bloody drongo", so my response was restricted. I went and complained to the manager and he agreed with me on everything, but in the meantime I missed my train. I was a little frantic about that, but they just bundled me onto the next train - and into the first class section. I had clean clothes to change into, but I was so harried by waiting in various queues, that I was still in my cycle gear that was on its 4th or 5th day without a wash. The couple next to me were having a very posh conversation ("Oh yes, I'd forgotten that Gordon is cooking for Claridges now"), while I was sitting there, reeking to the point where I offended even myself. The food isn't bad in first class on the Eurostar.

Anyway, the Eurostar carried me back to London, where I caught another train to Cambridge. I did 471km in the week, the bike held together with no problems, and it was just generally brilliant. I'll be cycle touring again at some point.

Anyway, I'm just back from the next trip. This one was 3 days away with the flatmates. Answers on the back of a postcard: 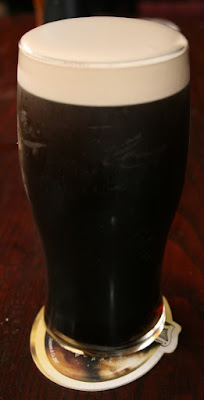 Holyhead to Dublin I bet. Did you do the 1am ferry? And please tell me you DID have a Guinness! DG