Give it a Berl in Europe (II)

The pattern for my recent trips has been overwhelming numbers of people. But Berlin in Autumn should be fairly quiet, right? Whoops, no, I accidentally picked Reunification weekend and Berlin was in party mode. I read afterwards that Al Qaeda had threatened to attack the festivities, so somehow word of this event had reached the caves of Afghanistan while I was still completely oblivious.

This weekend it was 19 years since the Wall came down. They were celebrating by walking 2 massive marionettes (a man and a little girl) across the city over a period of 4 days. On Saturday afternoon after I left the Pergamon Museum I decided to go and see the puppets. Unfortunately, half a million other people had had the same idea. 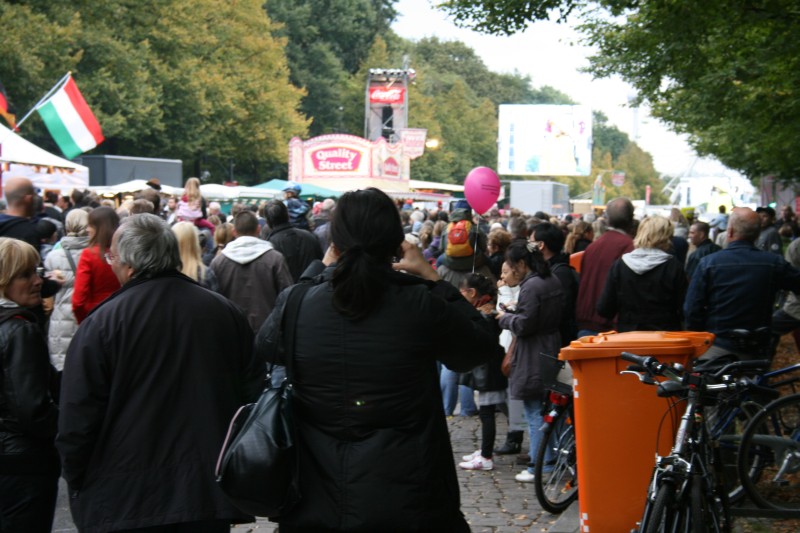 Didn't I see all of you at an airshow recently?
The crowds were assembled on one of the main streets - the Strasse des 17 Juni - and the police had put up barricades to stop anyone else from joining the throng. But the Strasse runs through a wooded area on both sides (Tiergarten), so after climbing through a security fence and a short thrash through some shrubs I was in the crowd.

I wasn't even that close to the puppets. They had made their way from opposite sides of the city to the Brandenburg Gate. I got to watch them meet up on a big screen. The man took off the helmet of his diving suit (?), and then the little girl floated up through the air into his arms, and the crowd all clapped. I have absolutely no idea what that was about. Whenever I see Germans celebrating unity, I feel the desire to steal a motorbike and do a jump over a barbed wire fence and away. Don't know what that means.

So that was that, and ... wait, do you really think I'd give up just like that? Oh ye, of little faith. Sunday morning I got up early and made my way to Brandenburg Gate. It turns out my elbows are about the height of the average German's crotch, so I fought my way through the crowd, leaving a trail of hunched and angry Teutons in my wake. 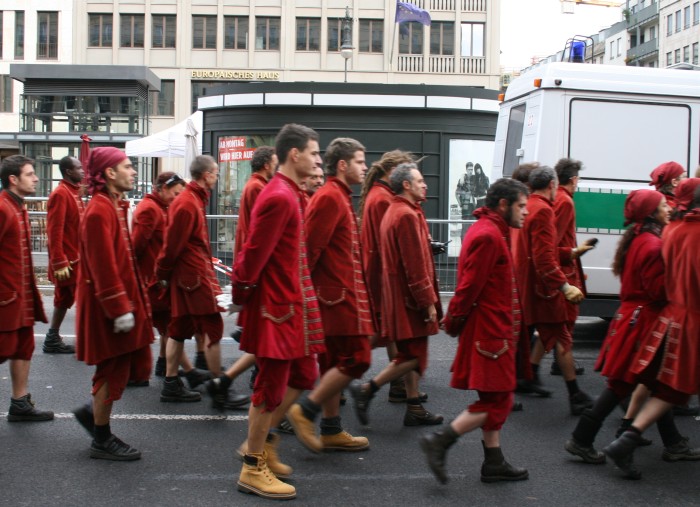 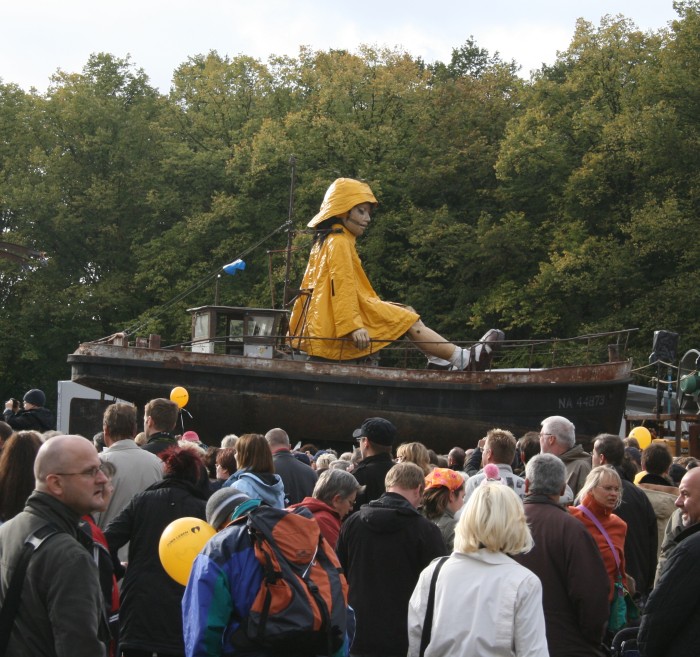 The Little Girl, on a Boat, on a Truck 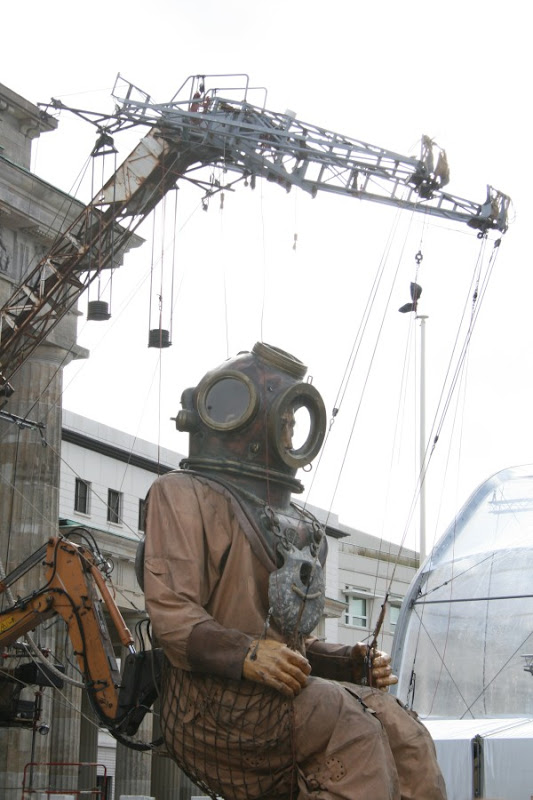 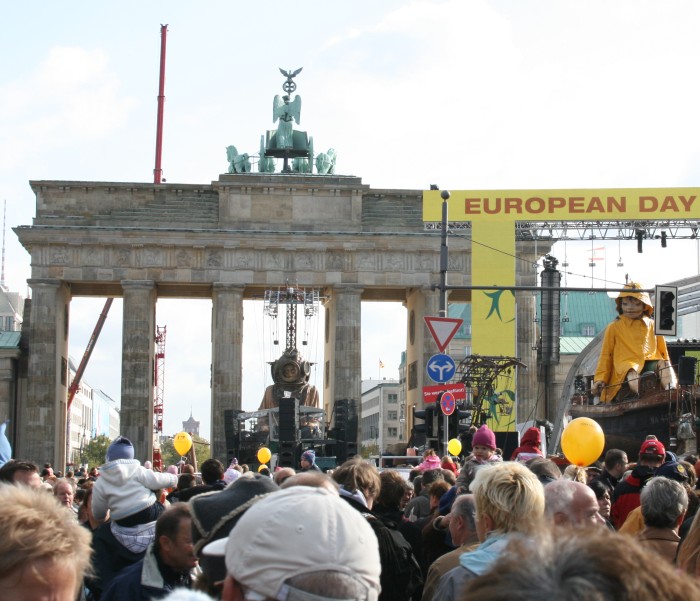 Both Puppets in Front of the Gate 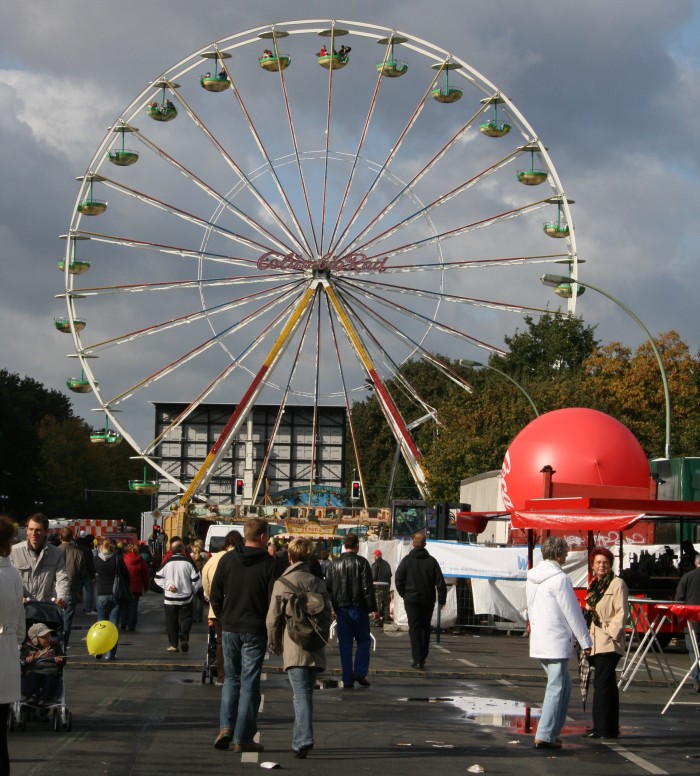 It was pretty damn cool. I visited our software vendor later in the week, and asked them what it was all about and they said they didn't have a clue. So it wasn't just me.

Someone in the crowd handed me a pamphlet advertising a free concert for organ donation. Sure, they promise a free concert and then you wake up the next morning in a bath full of ice with a lung missing. I'm not falling for that one. Again.

Here's a YouTube video. I saw the bit with the helmet coming off: