The Dunedin of the North

Do you know this one? 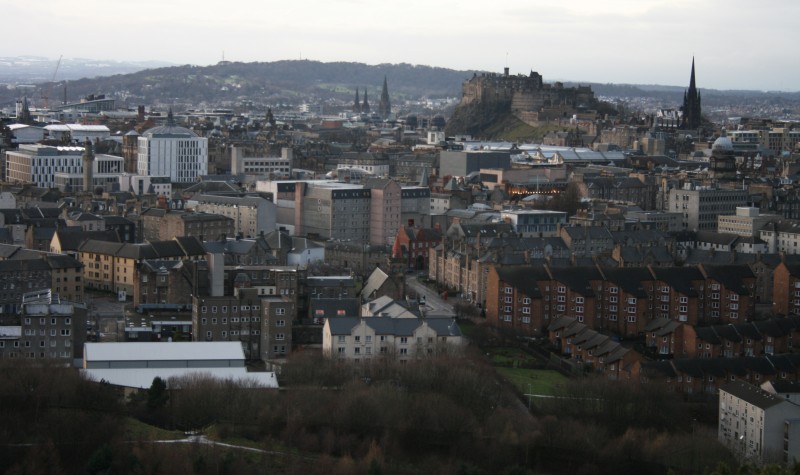 I spent last weekend in Edinburgh. Because it's there. This shot shows Edinburgh Castle, which sits on a mound called "the Mound". That Scottish flair for original names is also evident in Dunedin in NZ, which the Scots settled and gave many of the same street names as in Edinburgh.

The road that runs down the Mound is "the Royal Mile". 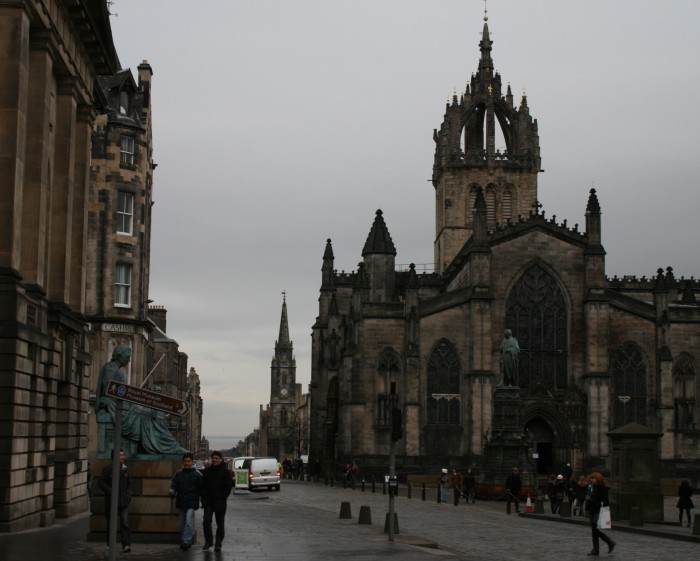 I took the opportunity to catch up with my friend M. She's a Kiwi who's been there for a couple of years now. She's developed the early vestiges of a Scottish accent, but only enough so far that other NZers would think she's from Gore. It needs work. She says I've picked up an English accent, but in reality it's just my talking-to-the-British voice. It's like my normal voice, only slower and clearly enunciated so the locals can understand me.

We went to Holyrood Palace, which is a British royal palace, and was the home of Mary Queen of Scots. In the gallery, there was an exhibition of photos from Scott's and Shackleton's expeditions to Antarctica. Very good.

We climbed up to the crags, which are a row of rock cliffs on a hillside overlooking the city. I was keen to climb up to Arthur's Seat, which is a high point on the extinct volcano behind, but it was perishingly cold and sheet ice made the walks dangerous. 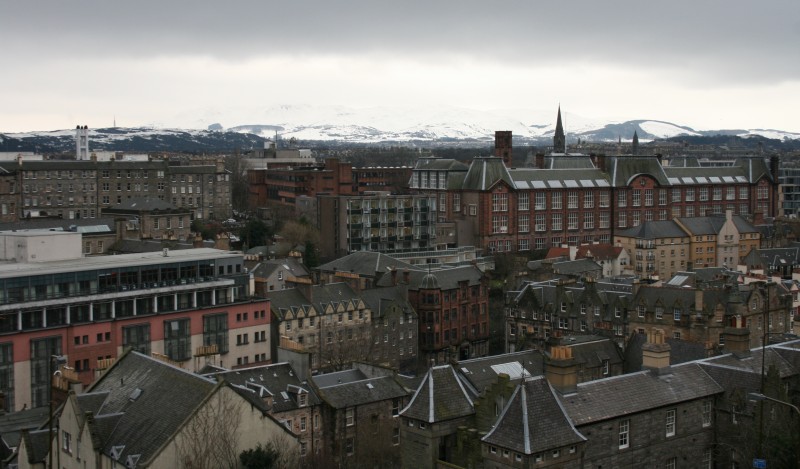 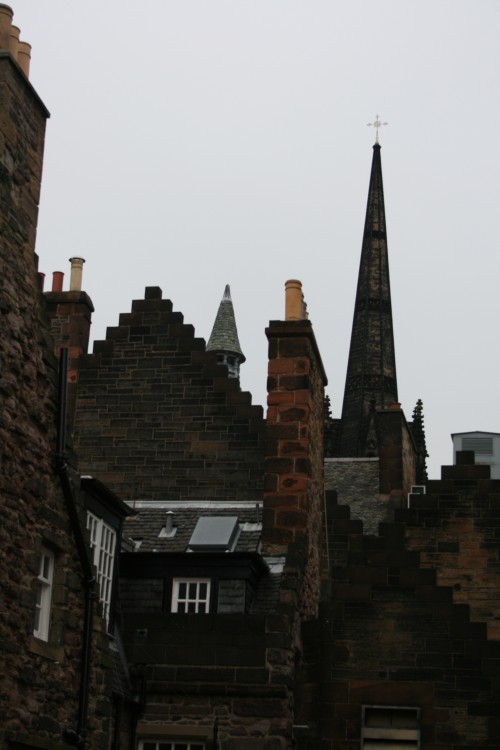 Over the road from Greyfriars Cemetery, there were 2 interesting sights. Firstly, there was the statue of Greyfriars Bobby. He was a policeman's dog who sat on his master's grave for 14 years. Makes that dog in Poland who only sat where his master died for a year look like a real piece of crap. 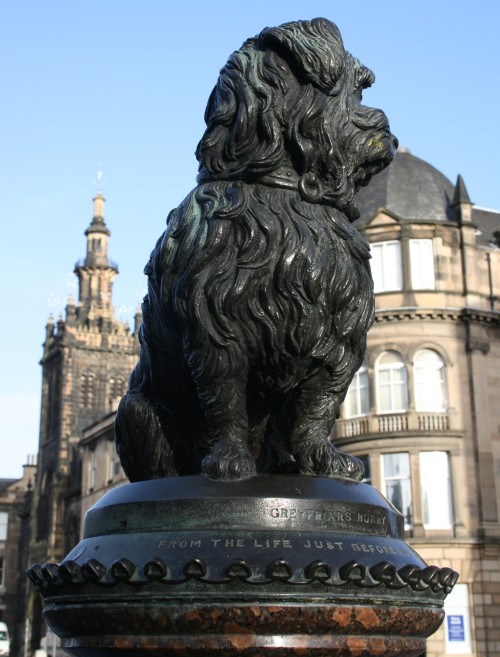 The other sight there was a coffee shop. JK Rowling wrote some of the Harry Potter novels in there. In the cemetery behind the cafe is the following grave stone. If it doesn't mean something to you, you should be ashamed. 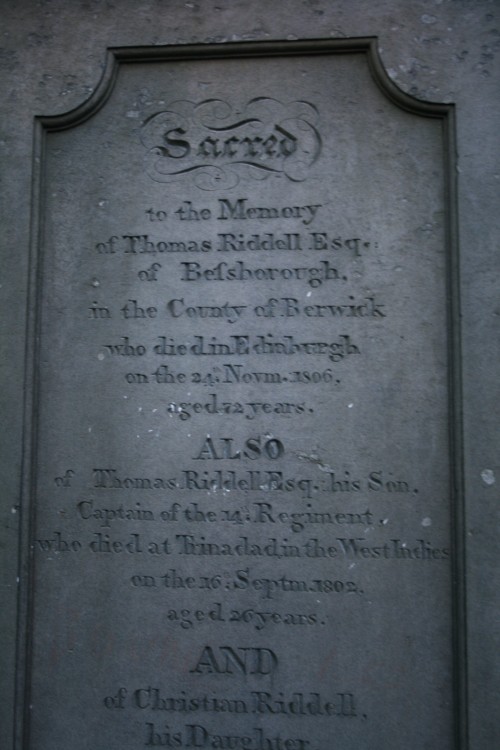 Behind the graveyard is a creepy childrens school. Coincidence? 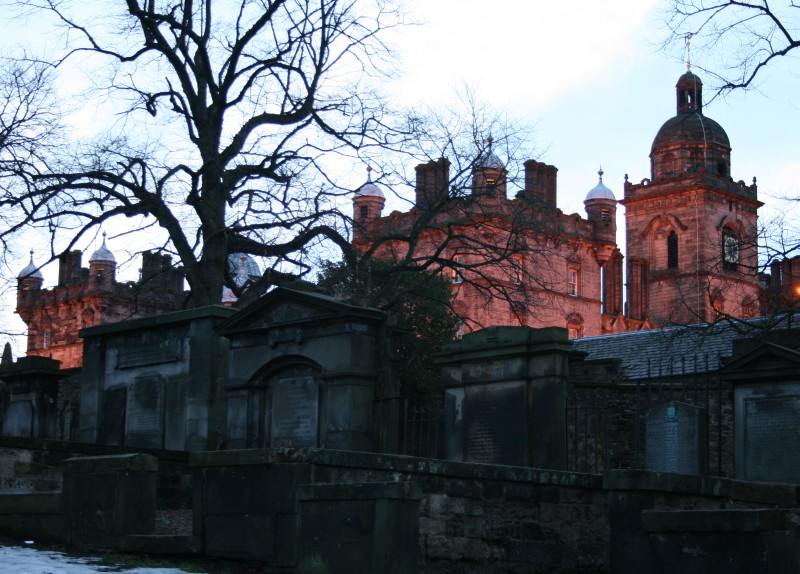 We spent a bit of time in that graveyard. Apparently, some of the old graves have holes visible on the sides of the headstones where bells were hung. This was because people were sometimes accidentally buried alive. Coffins had been found with scratch marks on the inside of the lids. Therefore, a string would lead down into the coffin, so if the person regained consciousness they could ring the bell and be rescued. This is the source of the expression "dead ringer". Yes, really. Anyway, we didn't find any bell holes.

I think somewhere in that gaveyard is the Black Mausoleum, one of the most haunted places in the world. We couldn't find it. 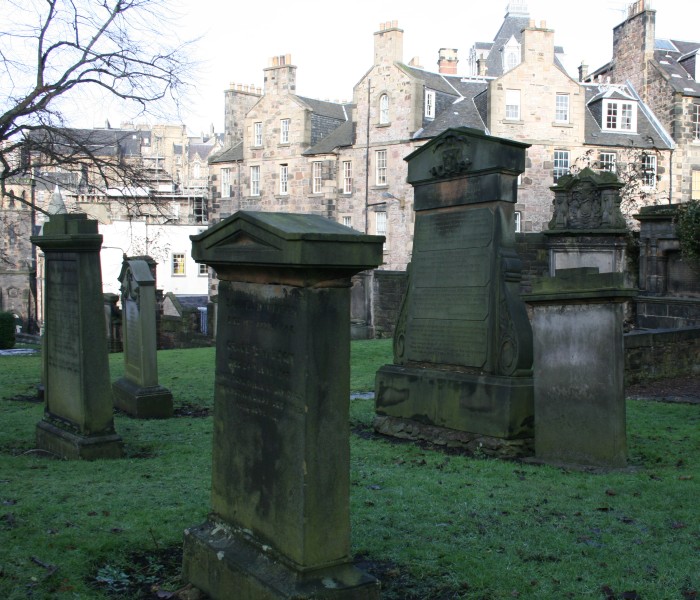 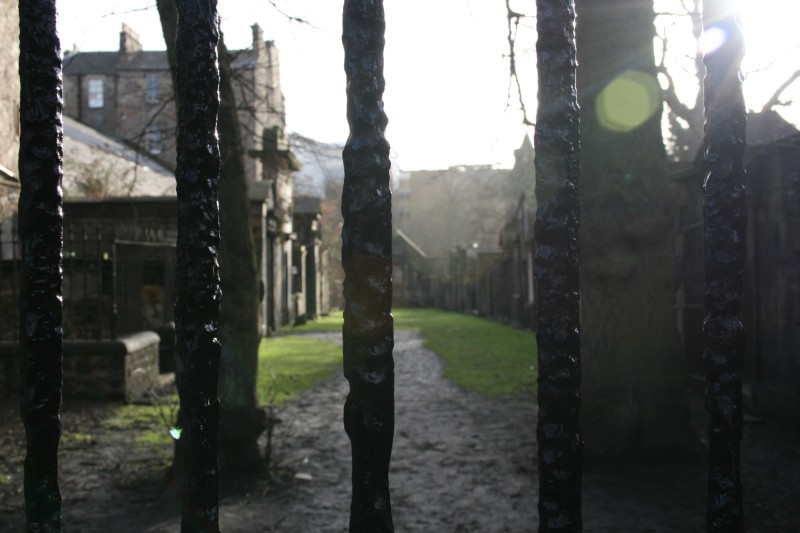 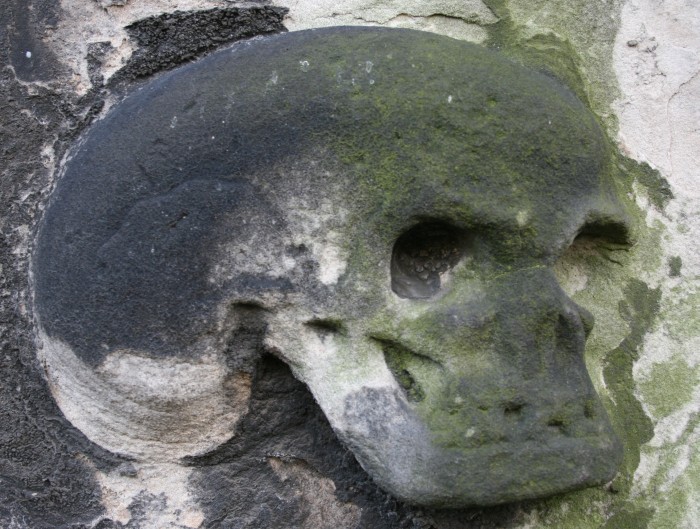 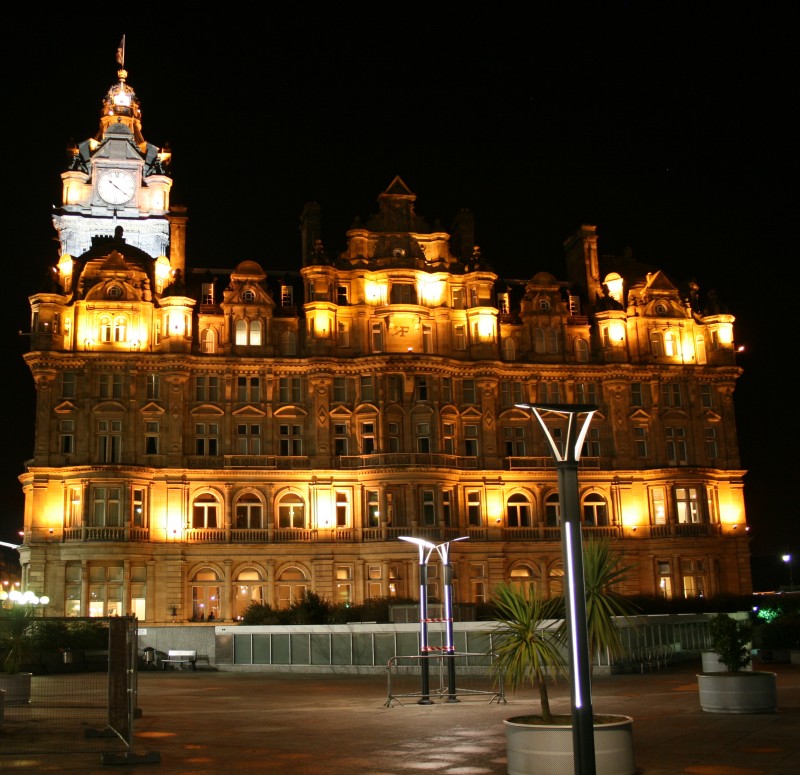 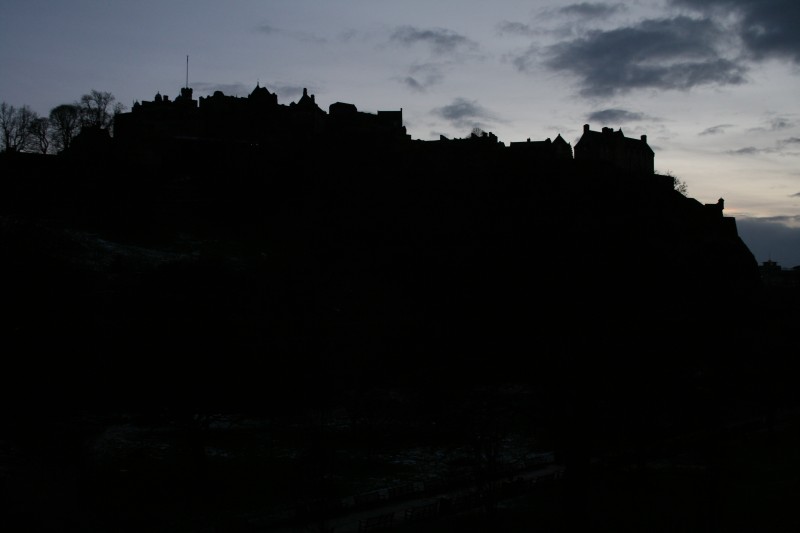 We did a murder and ghost tour of central Edinburgh. The highlight was going down into the Vaults, which was a subterranean section of the city that was sealed off a century ago, and only recently rediscovered. 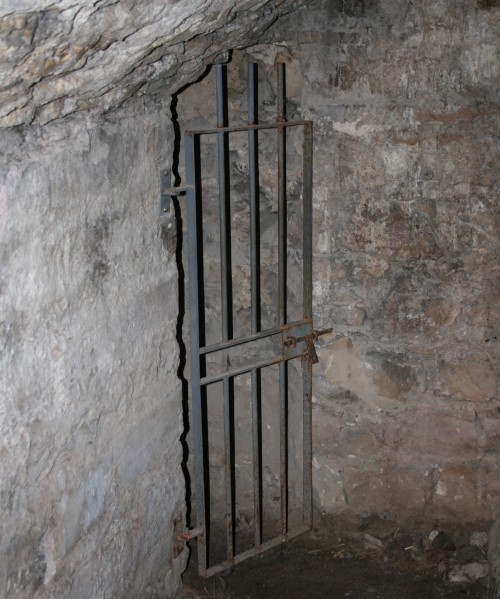 Apparently it's extremely haunted too, and the guide described a number of the ghosts that we might see. There is one corner in a room where women alledgedly get scratched or shoved if they stand there. A couple in our group took a photo of it, and it had a glowing orb floating in middle of the photo. They raved about the energy of the room and the sudden drop in temperature. M and I were polite enough to only begin mocking them once they were out of earshot.

I can't tell you what proportion of my photos have floating orbs or ghostly thumbs in them, but I never thought to blame ghosts for it. Perhaps the Easter Bunny is the reason that so many of them are out of focus. Anyway, it was a good tour. Some of M's friends have worked as jumpers, dressing up in costume and jumping out to scare the groups. This tour didn't resort to that sort of irritating behaviour, which was a mark in their favour. Recommended. Edinburgh has a lot of dark history crammed into that small centrl area.

So, that's about it for Edinburgh. I was only there for a bit over a day. It was a really fun trip, and one that I hope to repeat in the future.
Posted by James at 11:25 PM

Carolyn went to that school! (Herriots - sound anything like Hogwarts?) She took me through the grounds at dusk, and there was a fox running around in the quad, which seemed odd in the middle of a city.

The Black Mausoleum is in the Covenenter's Prison, through that locked iron gate you took a picture through. The Mausoleum itself is also locked. I got to stand in it on our ghost tour. Apparently one of the supernatural occurances is your feet suddenly feeling freezing, which would seem to me even more common in Edinburgh than glowing orbs in photos.

We had a guy jump out and scream on our tour. I would recommend it.