I've been to a few concerts this season.
Regina Spektor was a weird one. Her musicianship and singing sounded just like the CDs, but she didn't interact with the audience or say anything much, which was disappointing. It was quite similar to the Tori Amos show that I saw in that regard.
She spoke at the end, and explained that their cellist had drowned a few days earlier, when they were playing a jazz festival in Geneva.
I was down in the throng on the floor, so I could see almost nothing on the stage. But if you look at the start of this clip when they come out, the violinist pats the empty seat beside him. It was pretty sad, and the audience didn't quite know how to respond. My feeling is in this circumstance, it's okay to cancel a show.
I'd like to see her in concert again, to see if she's normally a bit more vivacious. (The video clips aren't mine).


Regina played at the Corn Exchange, which is the main concert venue in Cambridge. It's an old brick building, and the singer who opened for Regina said "Wow, this place is like Dumbledore's gymnasium", which is a pretty good description.
I went to a stage show of Michael Jackson's music called "Thriller Live" in the gardens of Audley End. My favourite bit was when the MJ impersonator called out "Audley End, are you ready to rock?" Audley End is a large stately home built out of an abbey after the dissolution of the monasteries. It has never, and will never, be ready to rock.
The show was pretty good. The downside was that the stage wasn't very high, and a lot of the audience went and stood at the front, obscuring the view. I went with a couple of friends from Cambridge. The guy saw the real Michael Jackson in concert in Melbourne and the audience did the same thing there, so I guess this was at least authentic.
He said that the Melbourne show was not long after the Tiananmen Square massacre, and Michael did a bit where a tank rolled onto the stage and he stood in front of it to stop it. An Aussie at the front of the crowd called out "Oi, mate! It's been done."
Sorry about the photo quality. 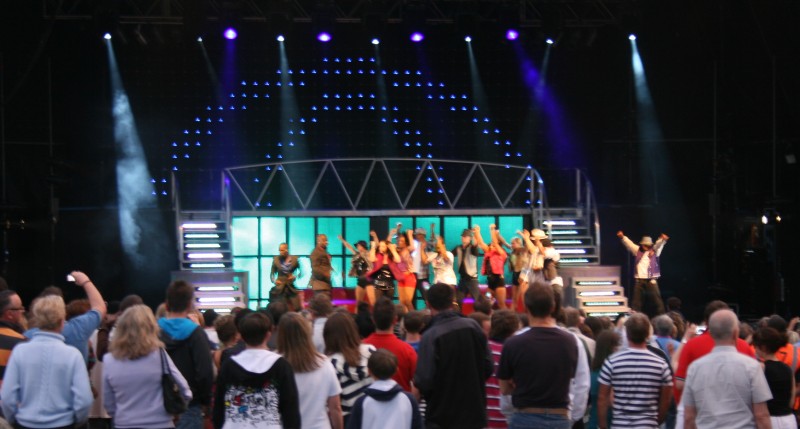 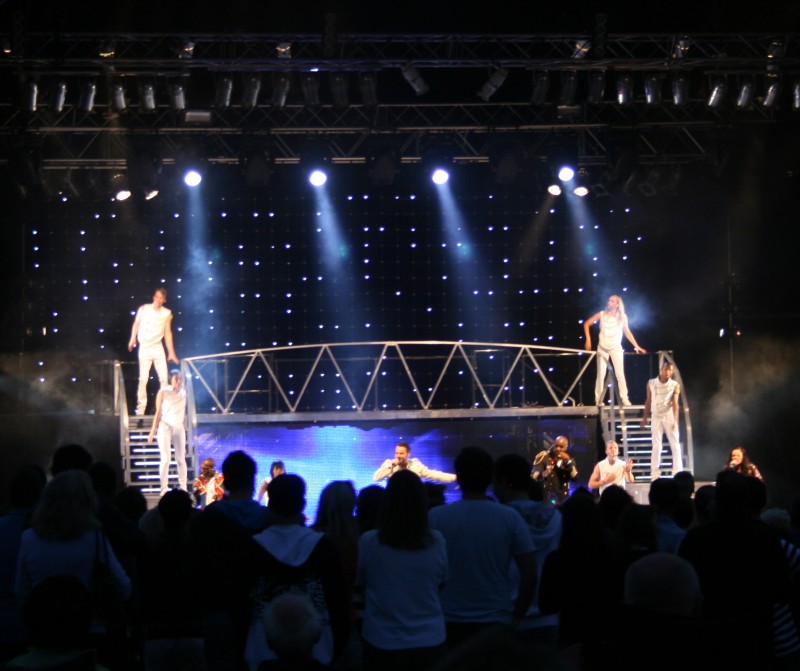 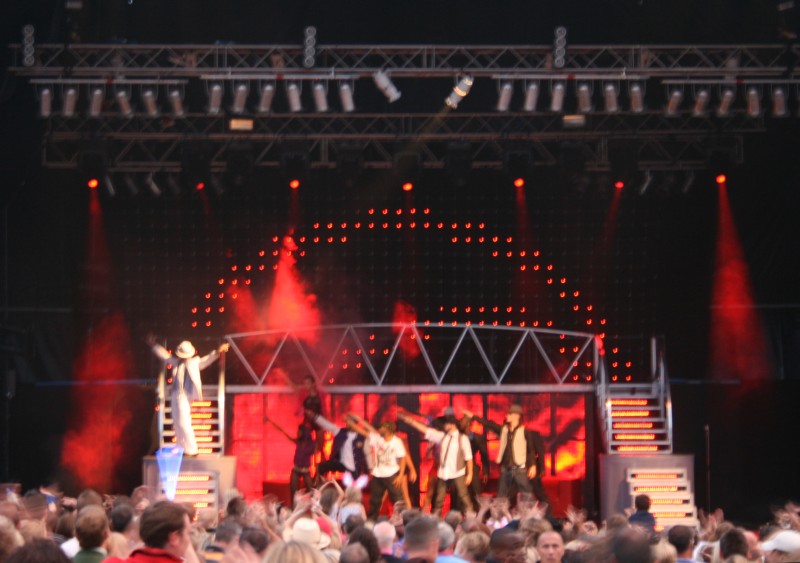 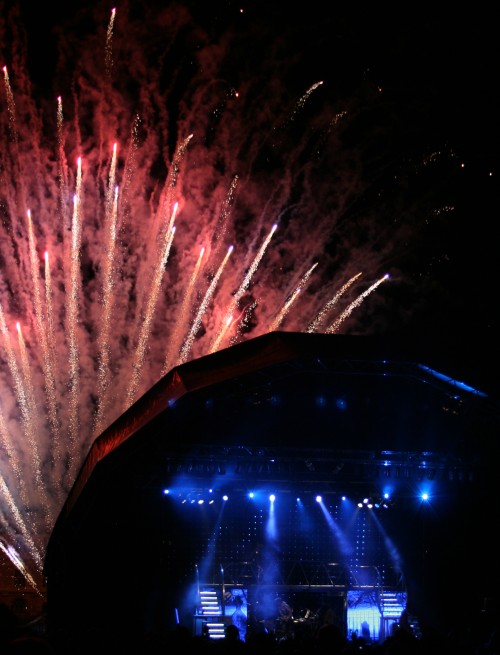 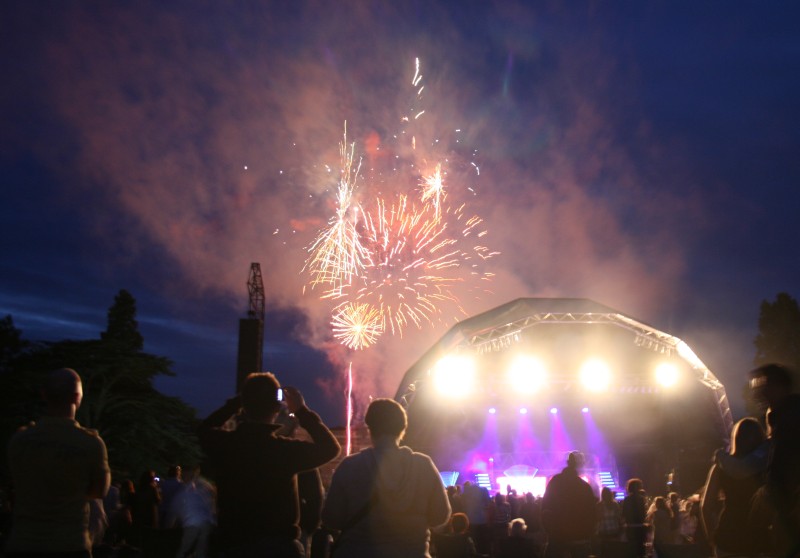 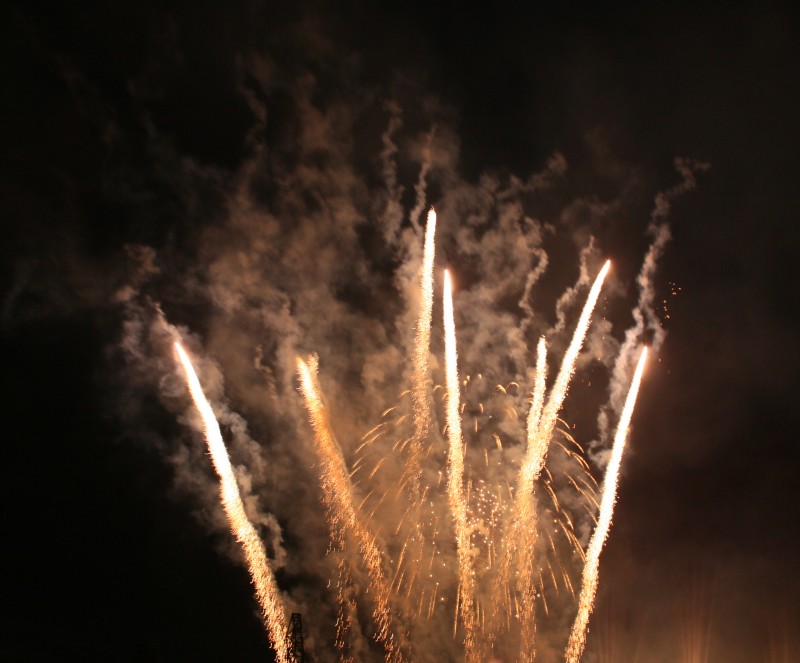 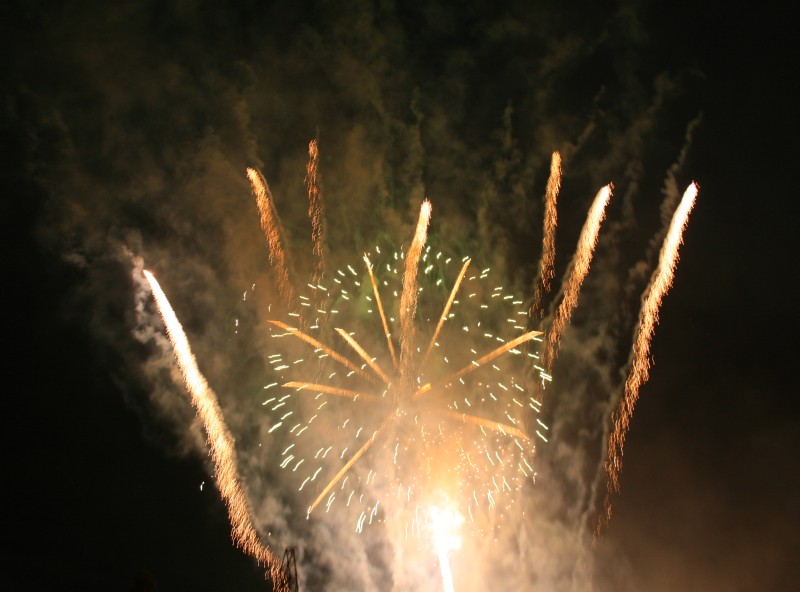 The most recent show was the Barenaked Ladies, also at the Corn Exchange. They're one of my absolute favourites, and they mostly stick to Canada, so it was a huge thrill to see them live.
If you don't know them, they're a Canadian band who do clever lyrics and the occasional improv song. You'll at least know one of their recent songs, which is the theme to the TV show "The Big Bang Theory" ("The whole universe was in a hot, dense state....").
It was the exact opposite of the Regina Spektor show. They played around with the audience, and it was a blast. They're a bit obscure in the UK, so I thought that maybe no-one else would know the lyrics to the songs, but the audience was full of Canadians, and they are to Canada what Split Enz is to NZ.
His best line here is obscured by the crowd screaming, but he says "It might be the dork waving the flag back there."
My question is, where are all these Cambridge Canadians hiding during the day?
At one point, Ed Robertson said that he has a pair of those new running shoes with the individual toes, and he walked out of his house with them on and a passerby said "Mate, where's the rest of your gorilla suit?"
By the way, the Wikipedia entry for the Cambridge Corn Exchange says:
"The site was originally the remains of the Priory of Friars Hermits which had been on the site since the Middle Ages. The priory was passed to a museum in New Zealand." Anyone know anything about that?
Posted by James at 2:52 PM