Romantic Road (III): A Bit of a Bad Day

I got to the castles around 9:30 in the morning. There was already a formidable queue. They are massively popular, drawing about 1.3 million visitors per year. I queued for about an hour, but as I got closer to the front, the list of available tours was getting later and later in the day. I realised that to remain to do a tour, I would essentially have to forego a day of cycling, and my schedule simply didn't allow for that. I went up to the Marienbreucke bridge and walked around the outside of Neuschwanstein, but I haven't actually been inside. Guess I'll have to go back.
Leaving Schwangau, the bike path runs through flowery fields beside a stream, and is very flat. I was flying along. Riding at over 30kmh, I was thinking of all the distance I could knock off in a day.

Then the path began to climb through hills. It was a bit of hard work. The path climbed through farmland and then through a forest. I gradually became aware that having done the bulk of my cycling in the Netherlands, East Anglia and the Canterbury plains, I am not well-practised at climbing hills. I do not care for them.
After riding through the forest, the trees parted and the rococo Wieskirche appeared. The church is pretty flash, and became a famous pilgrimage site because it had a statue that cried real tears. 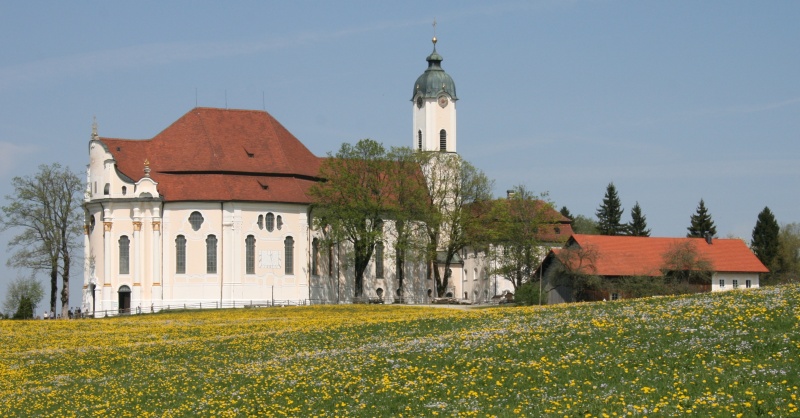 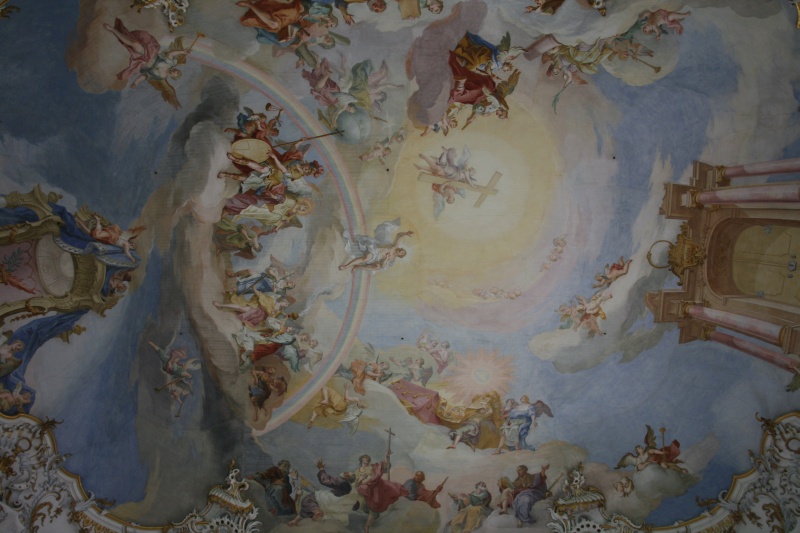 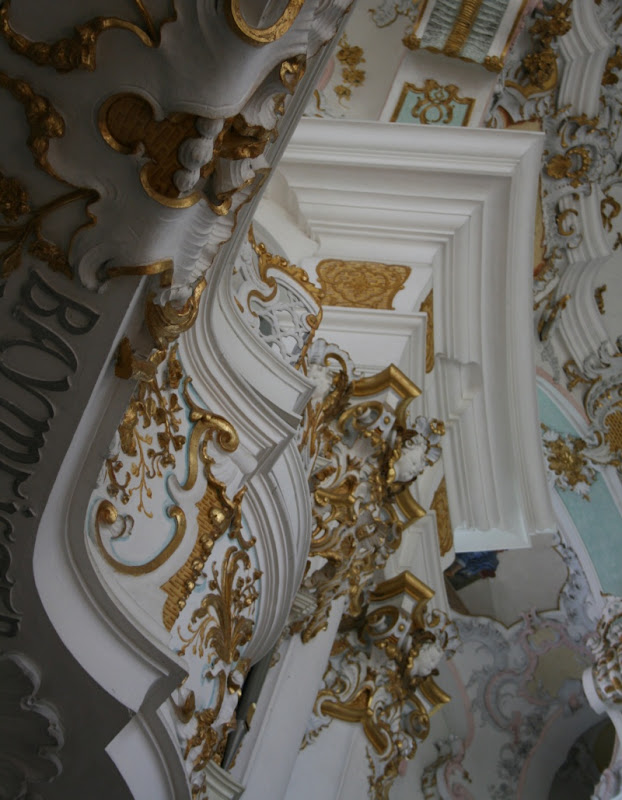 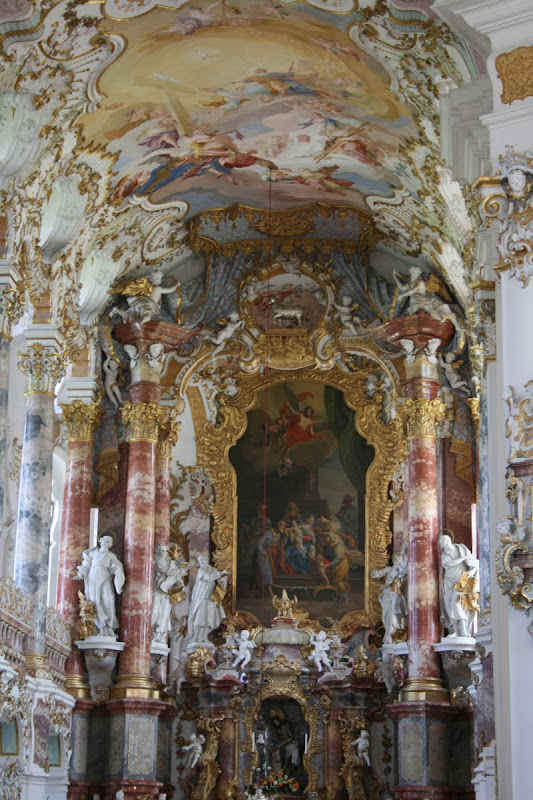 UNESCO and I disagree about which of these things is the truly great achievement of mankind: 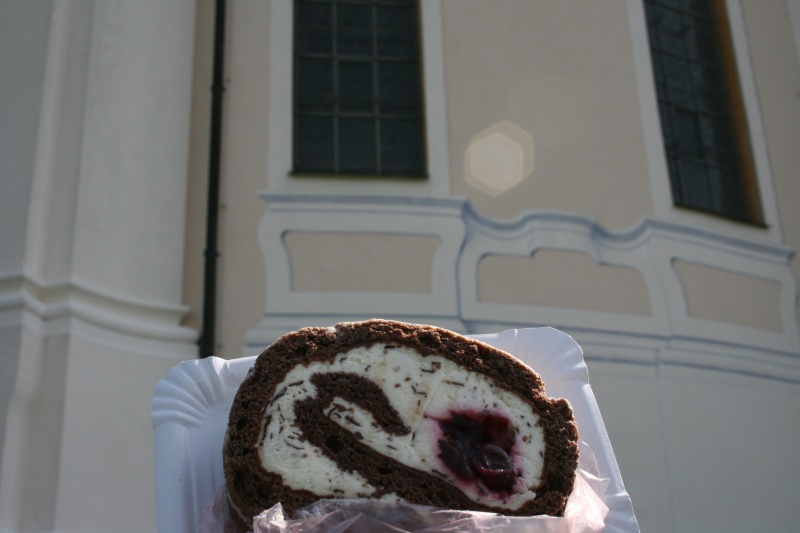 Black Forest vs White Church
A couple watched me take this photo, and in my stilted German I tried to explain to them what I was trying to achieve, but they didn't get it. Probably too high brow.

I rode on. At one point, I drifted off the Romantische Strasse, and found myself on the Milchweg instead: Bavaria's only bike route dedicated to the production of milk. I swear that's a real thing. At this stop, there were cow bells that you hit with a striker. The notes on the pages were colour-coded to match the bells. It was fun. 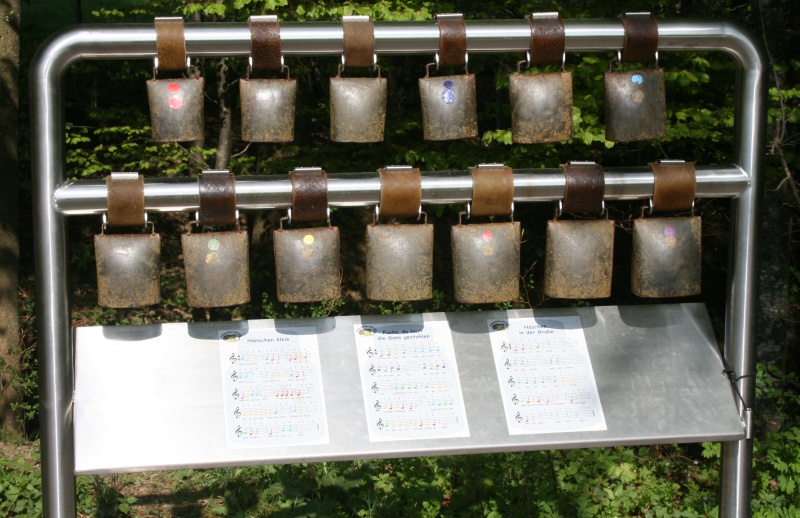 I stumbled on through the afternoon, but it became clear that I was not going to get even remotely near my planned destination for the day. There weren't any shops along the way either, so my only lunch was my piece of cake. In bike touring, there is a term "bonking", which is the point where you hit the wall on no energy. It's a bit dangerous, because you can make silly decisions.
By 5pm, I was starving and seriously bonking, and then the trees parted and a roadside schnitzel restaurant appeared. Now that's a pilgrimage I can believe in! 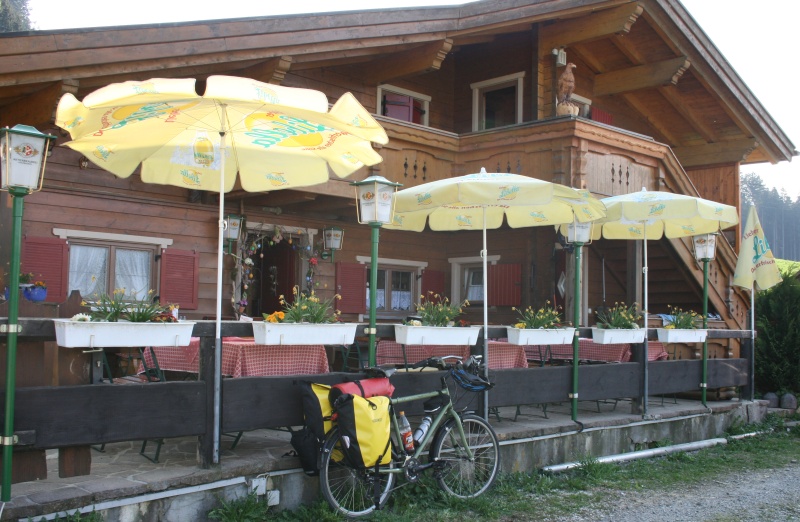 Salad in Germany is like something that they read about in a book but don't really understand, so you get half a kilo of chopped pickle instead. As long as that's a whole fried pig beside the pickle, I'm happy.
Refueled, I had the option of trying to make it to my intended destination for the night, 40kms in 2 hours, or turning back to the previous available camping ground. I set off, then turned back, went forward again, and finally gave up and went back to the previous site. Of the 90kms I needed to do that day, I had done 50, and 10kms of that was backtracking, so I had achieved less than half the required distance and I was knackered. This was not a good start to my riding.
I returned to the camping ground at Rothenbuch, where I found myself next to Australian couple Jason and Shannon, who are spending 6 months cycling around Europe. They kindly gave me some Easter eggs, which revived me a little.
It poured down during the night.
Posted by James at 4:03 PM