The reason I went to Italy was to see Siena's Palio. It's a horse race, dating back to 1656, that is run around the town piazza. One estimate that I saw for the crowd said 50,000 people attend. The crowd gathers in the centre and the horses race around the outside. 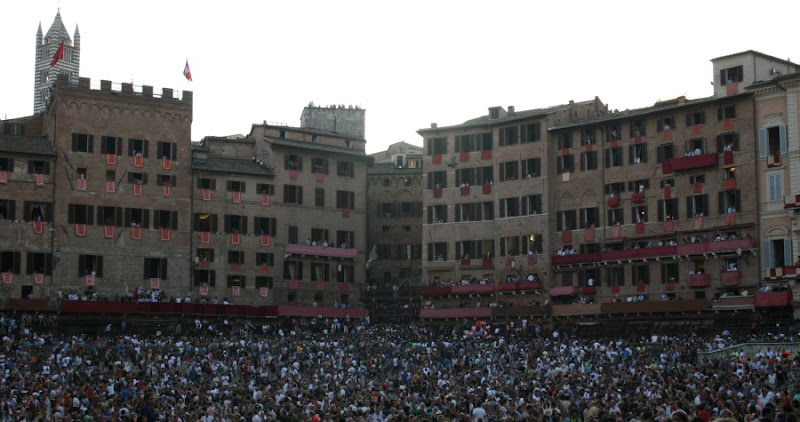 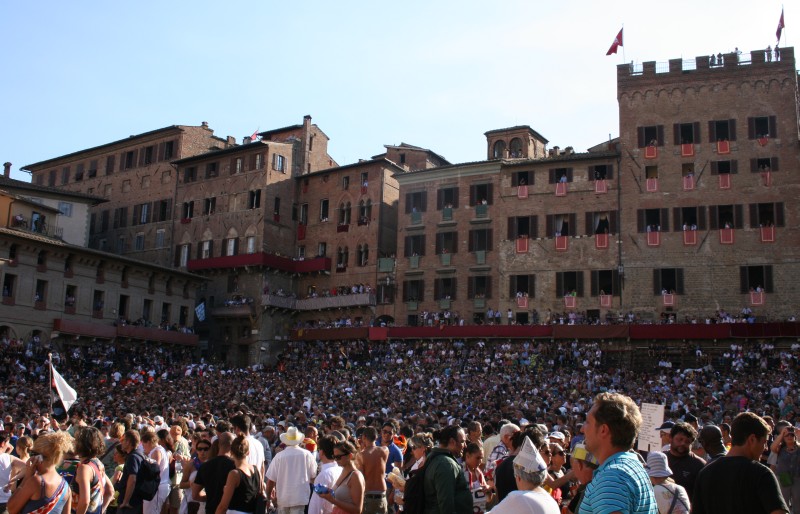 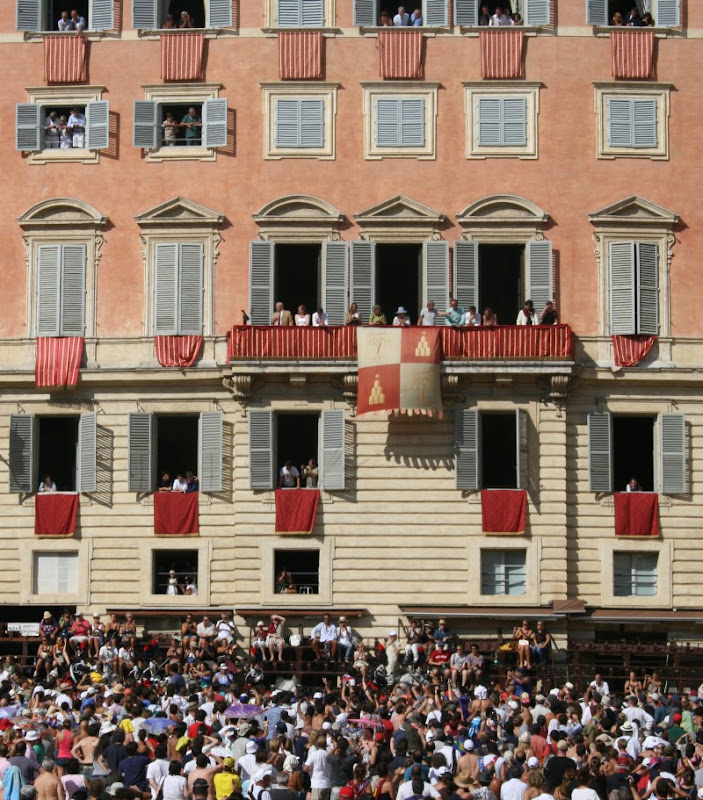 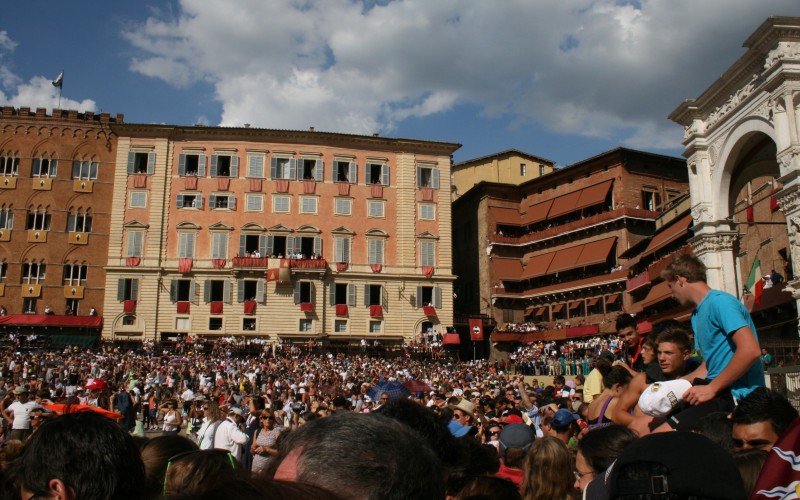 It's an absolutely surreal event. While it seems like a tourist novelty to us, the locals treat it with deadly seriousness. Siena has 17 contrades (neighbourhoods), 10 of which get to race. Winning is a prestigious achievement for a contrade and the jockey will be famous.
We were lucky enough to have a local to show us around and she bought us scarves supporting the Pantera (panther) contrade. Emotion is running high enough on the day that it was recommended that we hide our scarves when walking through parts of Siena belonging to rival contrades, lest we be harassed. I'm a fuckin' panther - do I look scared? 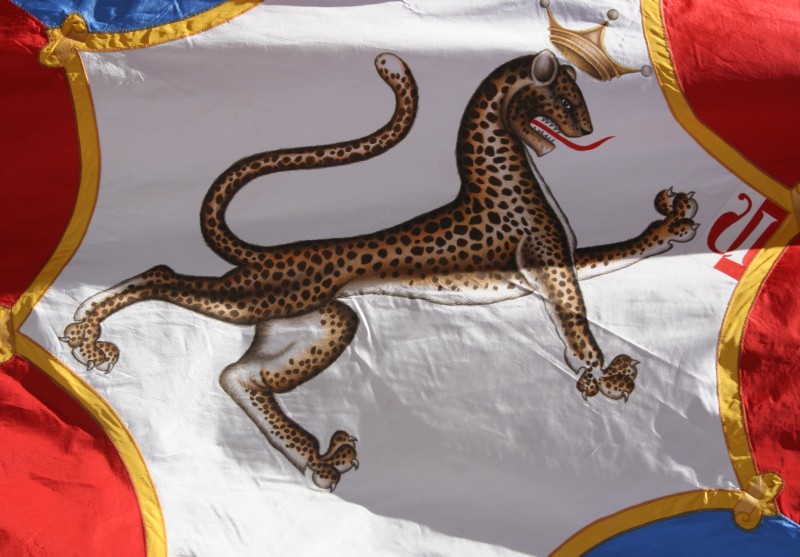 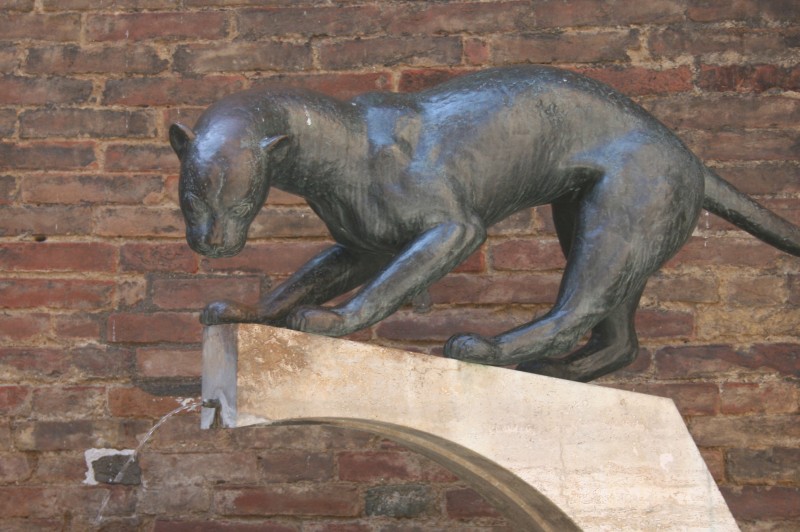 This is where the inside knowledge really paid off. Our awesome guide took us to a Pantera church and managed to get us in to see the blessing of our team's horse. That's right, they lead the team horse into a crowded church for a blessing. This doesn't do a lot to change my opinion of organised religion. 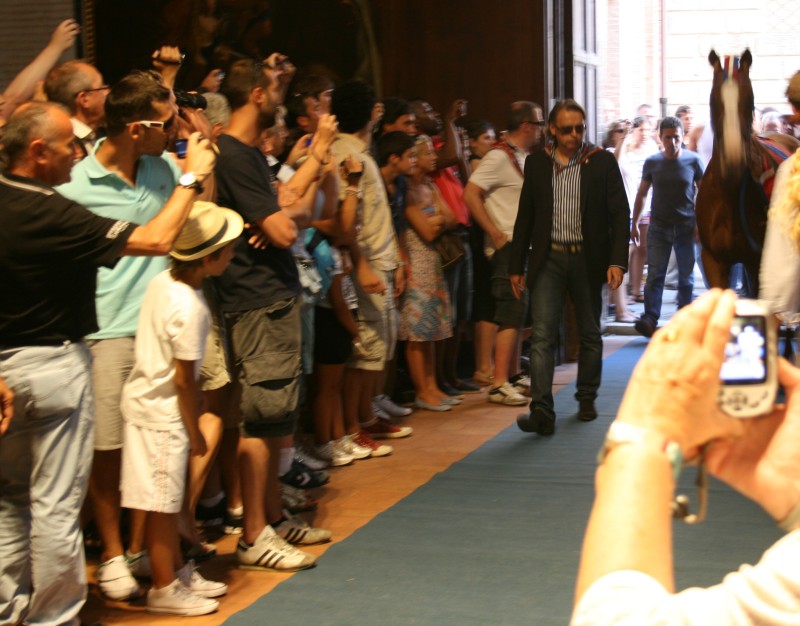 The Pantera horse: Colla. I don't speak Italian, but it sounds fast. 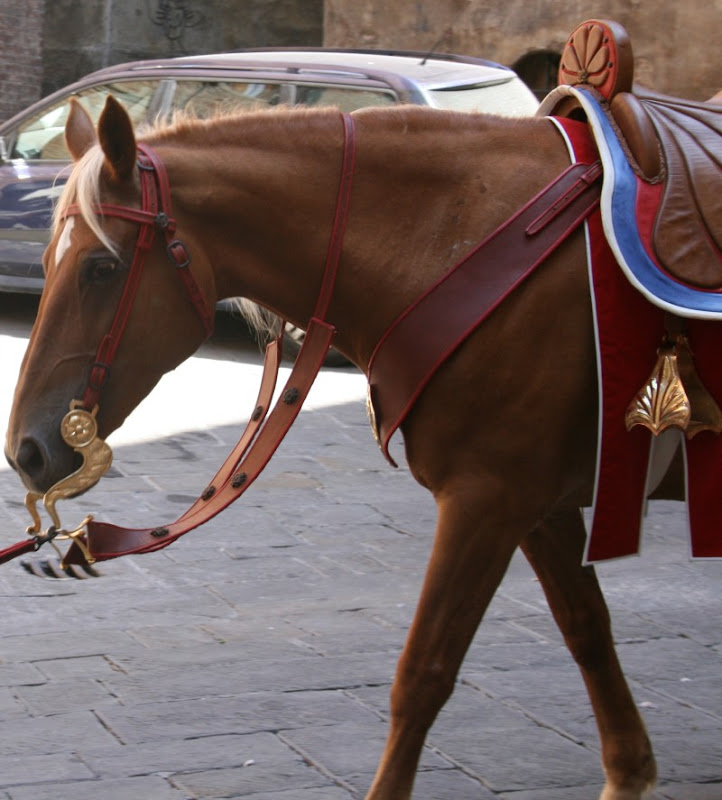 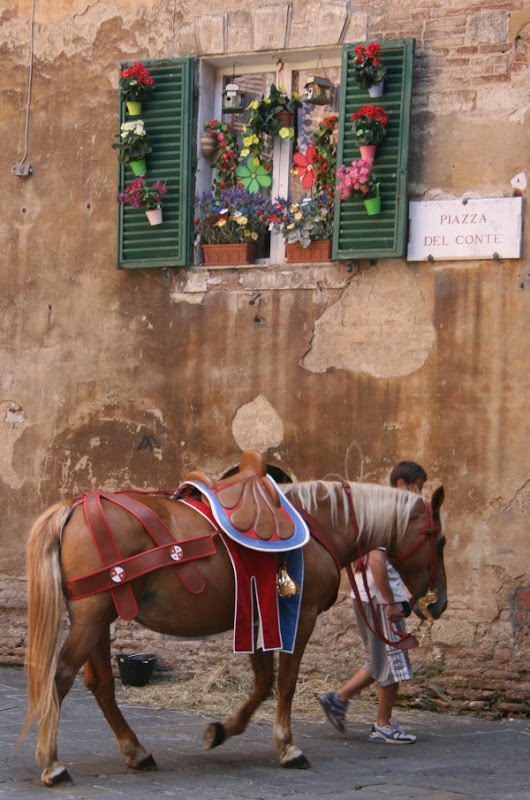 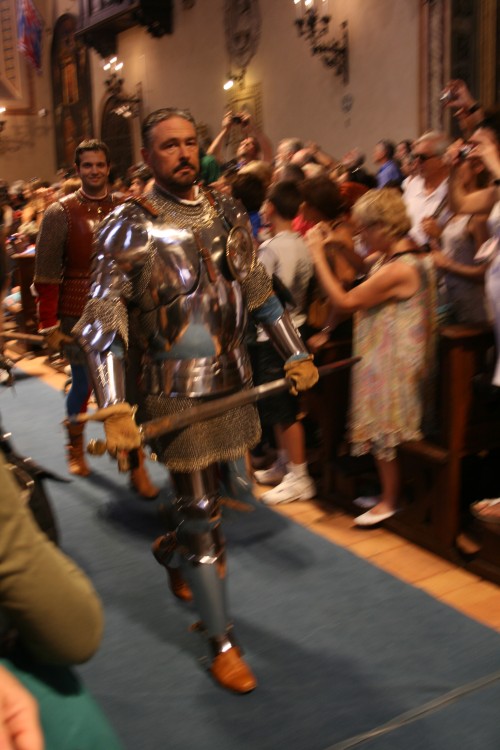 The head of the contrade in his best Sunday armor
The horse is then led in a procession to the piazza. 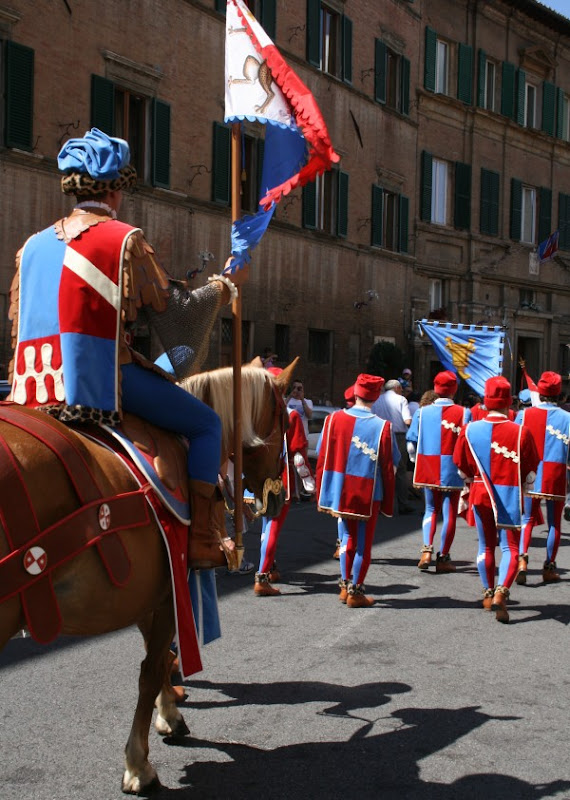 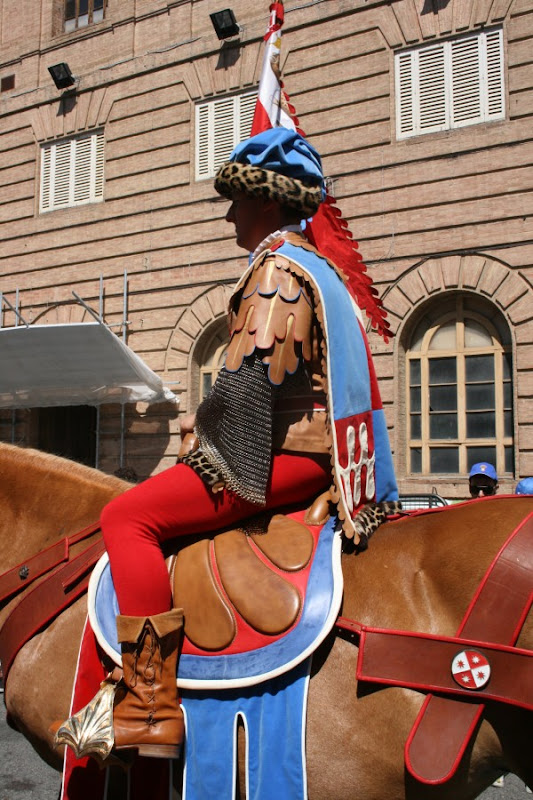 It's a race where cheating is acceptable. For the week before the race, the jockey may sleep in the stables to protect the horse. Contrades with strong horses may bribe the weaker teams to impede their rivals and jockeys will whip eachother during the race.
The race itself is only seconds long, but it is preceded by a procession of 600 people in medieval costumes. This takes most of the afternoon and there is no shade in the piazza. It is baking hot. At least I wasn't wearing tights and a steel breastplate.

The Palio itself is the black and white banner on the ox-drawn cart. It is the prize for winning. 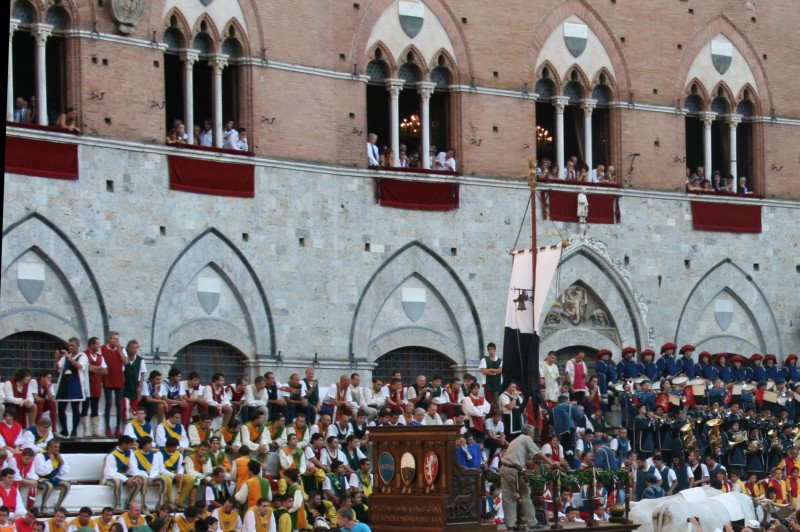 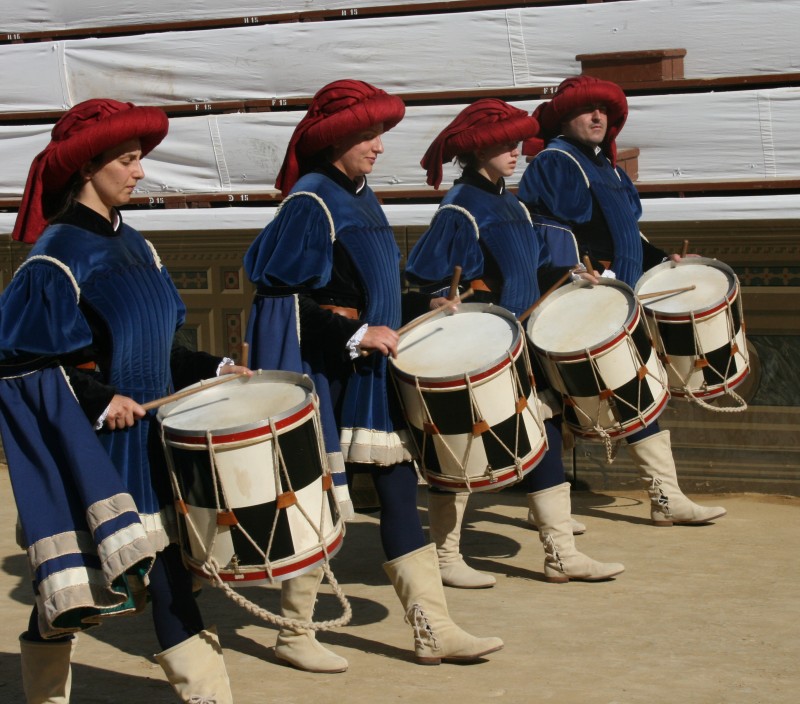 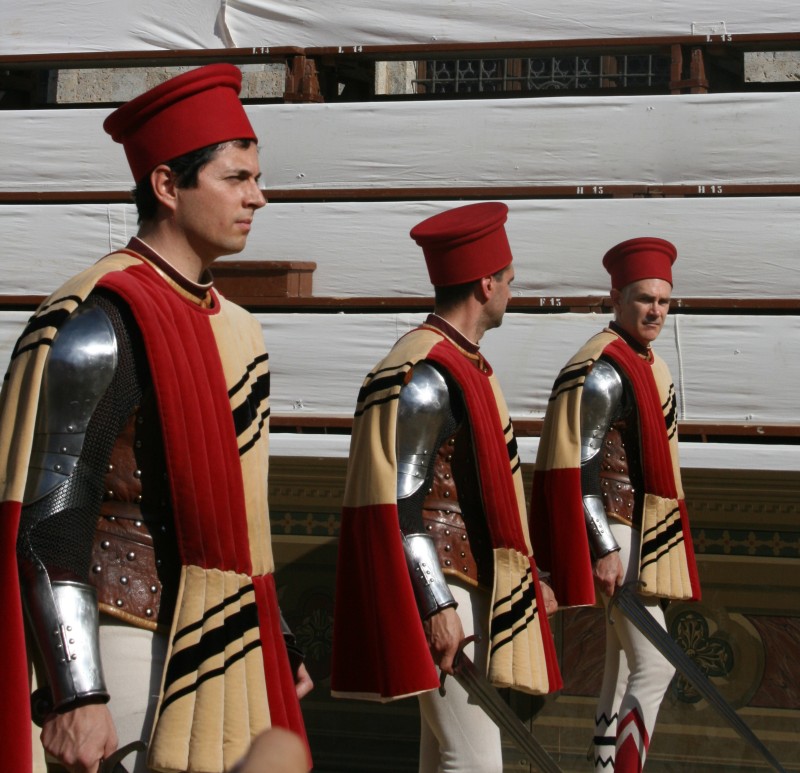 The mounted police prepare to do their ceremonial gallop around the track: 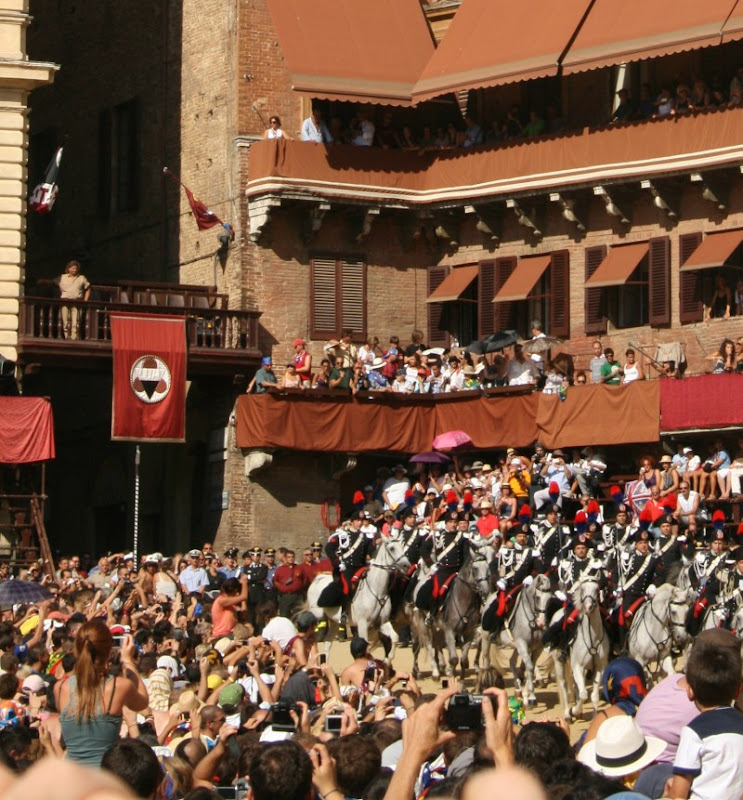 One of the final groups to complete the circuit was riders in closed helms. They represent the riders who have died. 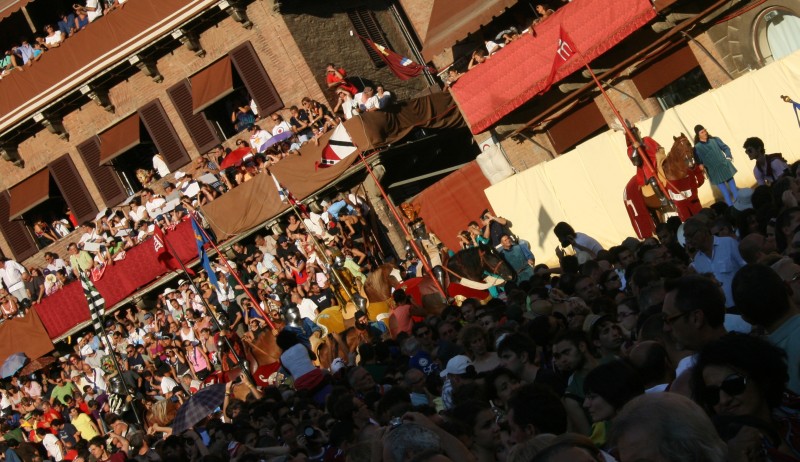 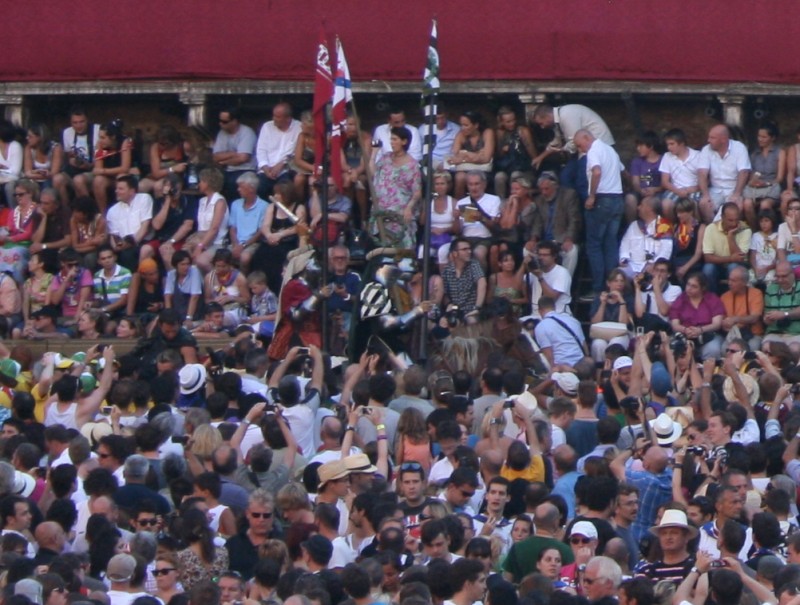 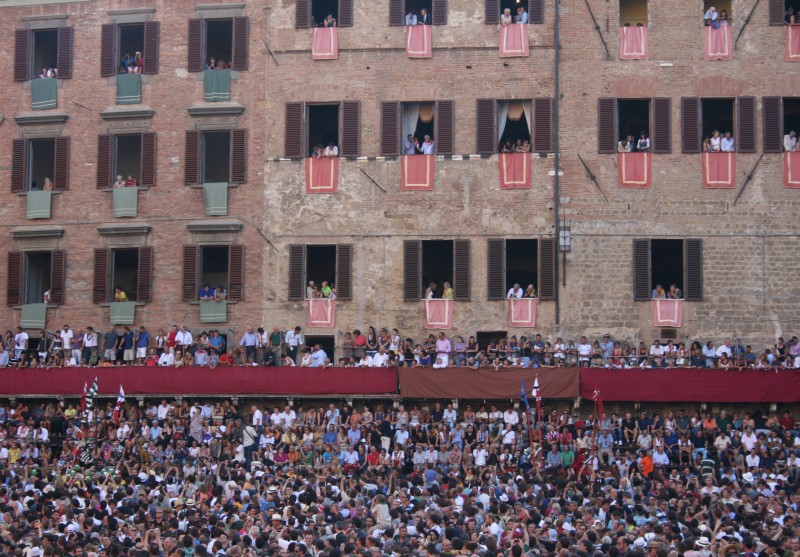 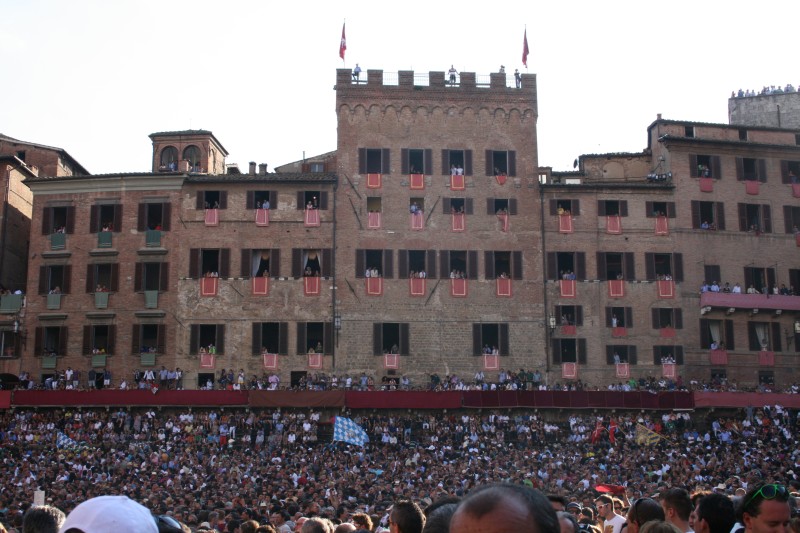 Part of the procession is made up of pairs of men with the team flags doing choreographed moves. They throw the flags to eachother in high arcs. 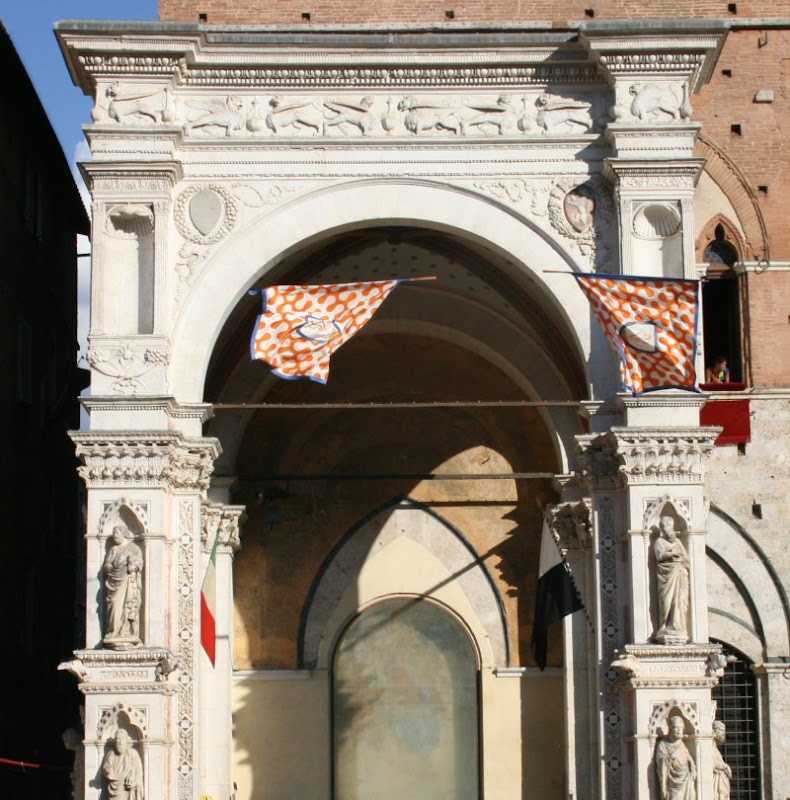 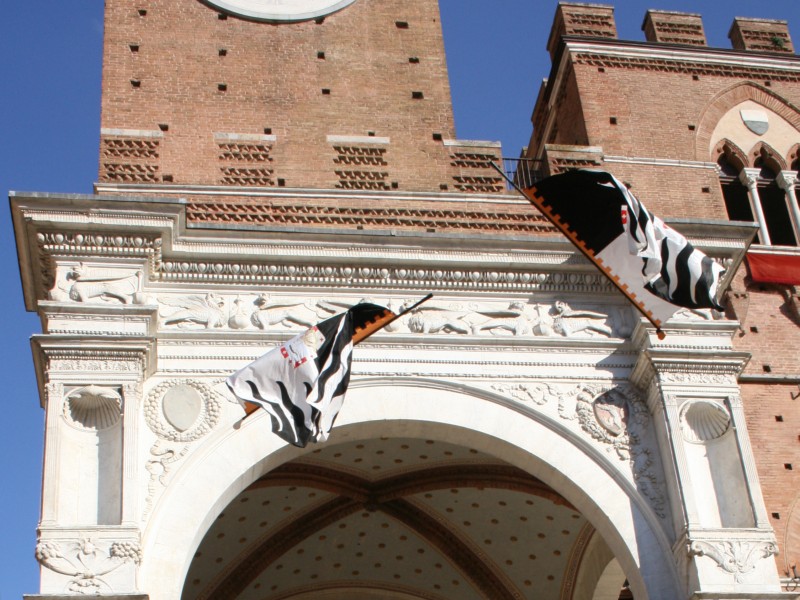 Finally, the procession ends and the horses begin to line up to race. There is a set order that the horses must approach the starting line, and the race cannot begin until all the horses are lined up in order. This can take another half an hour, because the last horse has the ability to prevent the start and force all the others to begin lining up again. He will have been bribed, and will continue upsetting the start until he sees an advantage for one of the others.
Finally, the race began and in a flash it was over. Chaos broke out. The Pantera horse was last and the Pantera jockey vaulted off the horse and ran with the contrade members in pursuit. If they caught him he would get a beating for losing.
The supporters of 2 contrades began a large rolling brawl in the crowd. We were told to hide our scarves again to avoid being targeted. I saw one bloody guy being carried away by the medics.
Everyone turns to look at the brawl:

At one point everyone around us began running, so we ran too. It was an interesting experience of crowd mentality.
And of course, the winning contrade began celebrating their win: 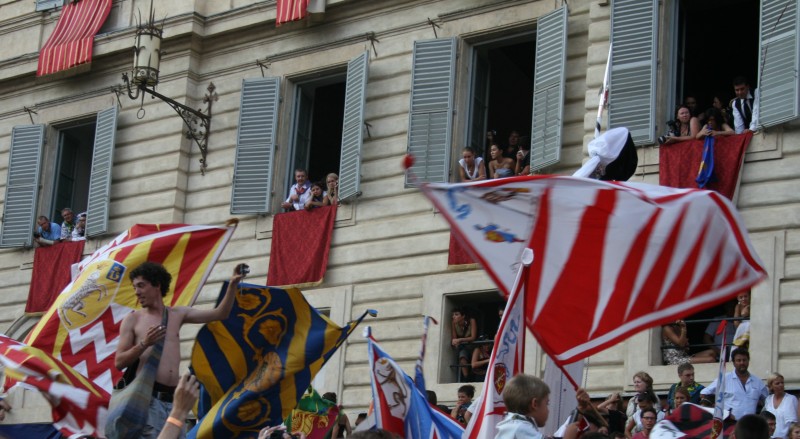 So, that was something.
Posted by James at 3:33 PM