I cycled south-east from Luxembourg City until I briefly passed back into the French countryside. 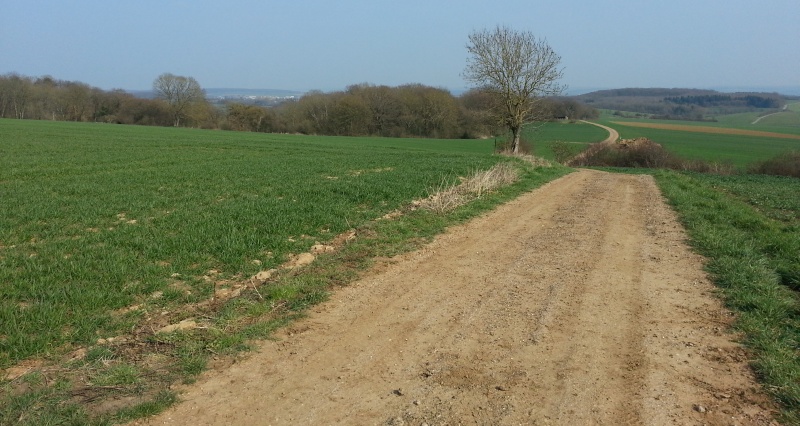 I then turned north east and rode through hills with vineyards to reach the Luxembourg border with Germany, which is marked by the Mosel river.

I camped at the Camping et Port de Plaisance on the edge of the river, looking across to the state of Saarland in Germany. 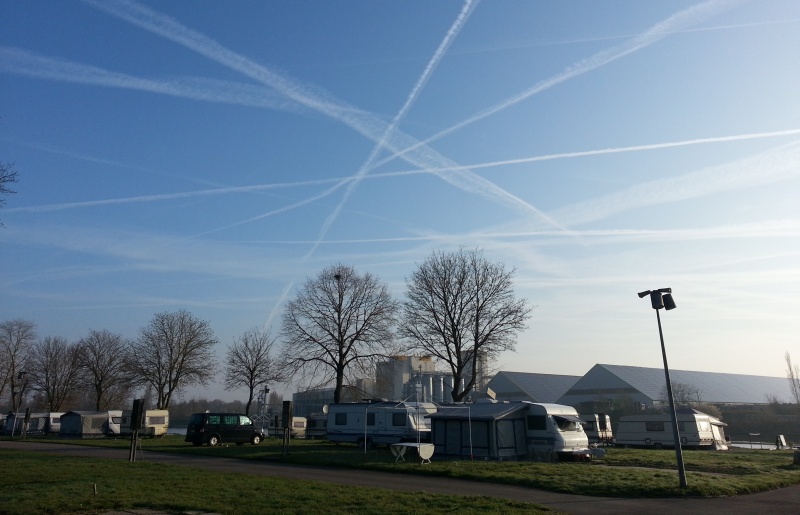 In the morning, I cycled 5km north to a bridge and entered Germany. 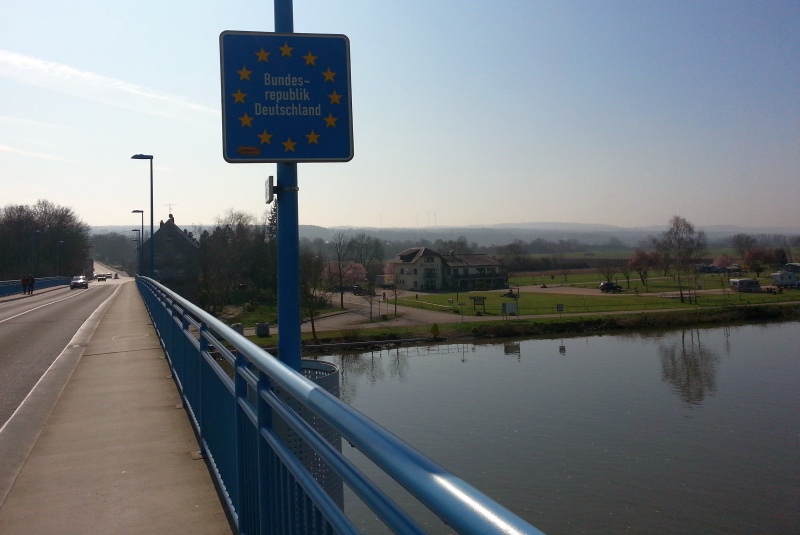 Just across the border, I saw a sign pointing to a Roman mosaic, which was an opportunity I couldn't pass up. It was fantastic! 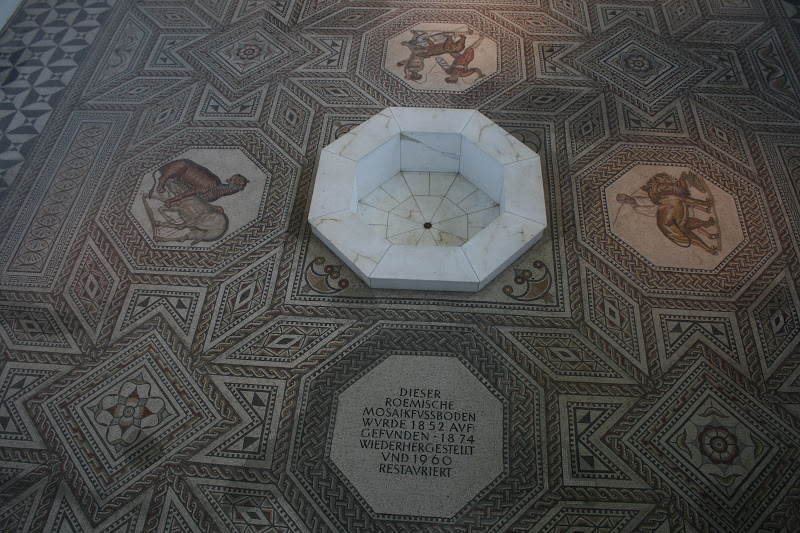 Heading away from the Mosel river, I started to climb rapidly, with an impressive view back to the river.

I cycled to the town of Orscholz by the Saar river. Unfortunately, Orscholz is on a famous bluff called "die Cloef" that overlooks the bend in the river, and I couldn't work out how to get down to the river.

After a lot of time and after taking a wide loop, I eventually found myself on a road running in switchbacks down to the river and I raced down. As I zoomed downhill, I startled a deer by the side of the road. Okay, maybe the startledness was mutual.

At the river, I joined the Saar cycle route and headed south to the town of Merzig, where I camped at a kayaking club by the river.

The cycle path was flat and smooth, and I set off at pace the next morning. I passed through pretty Saarlouis, Völklingen with its massive UNESCO rated iron works, and then Saarbrücken. There, I stopped for a kebab lunch and a kind German cyclist showed me to the town hall, where I collected some local cycling maps. I followed one of the paths out of town to the east, which lead through a forest and hills.

At one point, I crossed the Siegfried Line, the WWII German defensive line. You can still see mounds that were bunkers and tank traps. 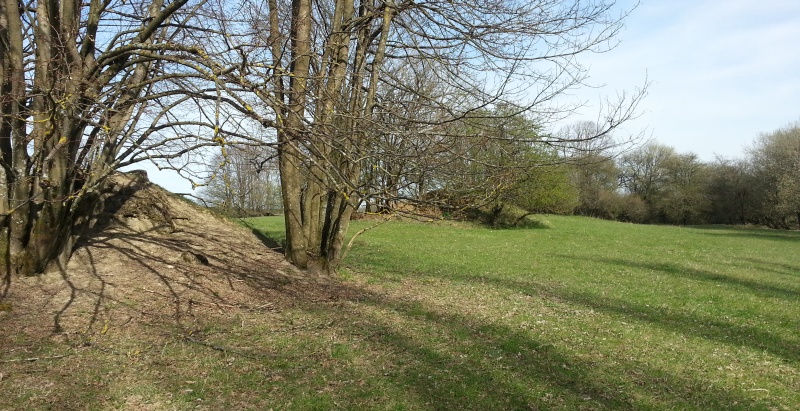 I stayed at the Caravanplatz Mühlenweiher camping ground in Kirkel. I didn't have many supplies left so I wandered into the town. Everything seemed to be closed and deserted until I turned a corner and found a large supermarket, open until late. I had a great feast that evening, including a punnet of strawberries.

Once again, I was located in a deserted area for tents. In the night, 3 guys tried to break into the camping ground by tearing down the side fence. I think I scared them away with my torch.

The next day, I followed some established cycle routes: the Glan-Blies radweg to Niedermohr and then the Barbarossa Radweg which skirted the edge of the famous Ramstein military base. Somewhere around Homburg I left Saarland state and entered the Rhineland Palatinate. 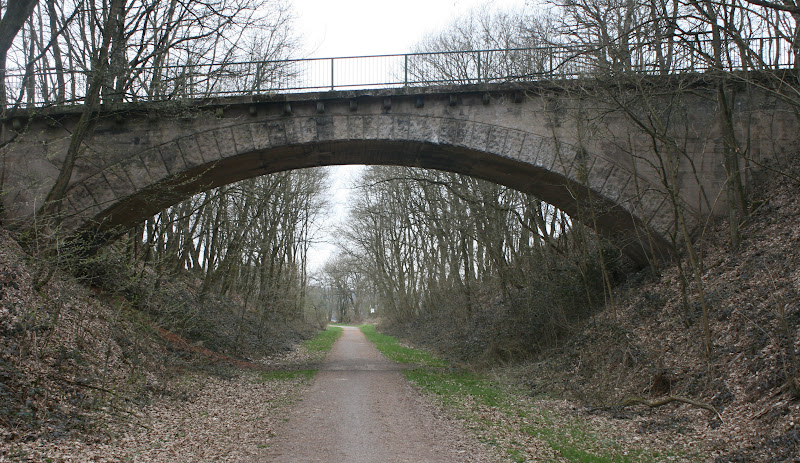 With my clothes needing a wash and my electronics needing charging, I took a room in Kaiserslautern for the night. The website described the hotel as cycle-friendly, but when I arrived there was no one at reception. Instead, you phone them and they tell you a code to get in. When I asked about my bike, the fool on the phone said I would have to leave it in the street. Since the reception was un-manned, I threw my bike over my shoulder, carried it up two flights of stairs, and kept it in my room. Fuck them!