I took a half day to complete my ride to Slavonski Brod. 25km after leaving Nova Gradiška, I passed 3000 km. The traffic along the way wasn't too bad. At one point, I was overtaken by 2 recumbent bikes covered in panniers. I chased them and spoke to them at a stop. They were a Belgian family. One bike had the father and 2 children, the other had the mother and another child. They had been camping wild, which I was shocked at, given the minefields.

I rented a really nice room. There wasn't much opportunity to camp during this part of the journey, but accommodation was so cheap it didn't matter. I wandered along the edge of the Sava river to a supermarket and stocked up. On the far side of the river was Bosnia.

The sweltering temperature of the previous day was a little lower.

I booked a room in a house. No one else was there, so I had a house to myself for 10 pounds. The house was in a residential area with just one shop - a sex shop. It looked very out of place. 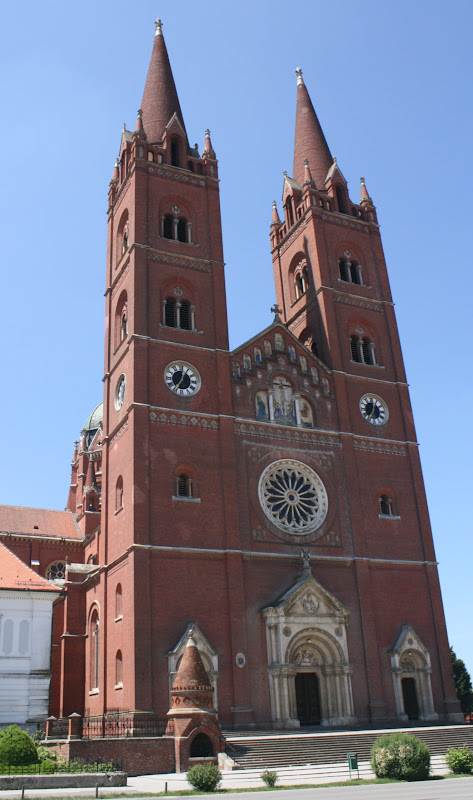 I headed south again and got to Vukovar. It suffered pretty badly in the war. When the Serbs invaded, 291 trapped at the local hospital, including staff, were killed and dumped in a mass grave. The town's water tower is still full of holes. It stands as an icon of the war. Today, the town is trying to stop its young people from leaving, so they can contribute to the rebuild.

It's a strange situation. I spoke to an Austrian Croat who was visiting. He said that there are still Serbs and Croats in the town, which amazed me. There is obviously still tension. If you order a beer in a bar, you need to be careful. The type of beer you order will give away your ethnicity and you might get a smack in the head. The couple who owned my guest house were a Croat and a Serb.

I had dinner in a Mexican restaurant. 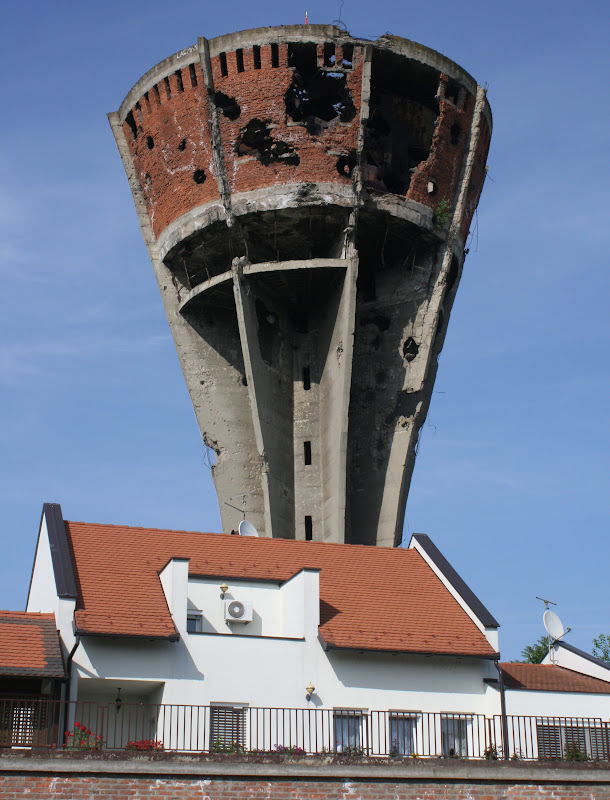 On a walk to the town centre, I re-encountered the Danube. I had previously ridden along it in Germany, outside Ulm. The next morning, I rode along the bank of the river. At one stop, a snake slowly slithered across some rocks in front of me. It was decidedly long. I reached a bridge with an international border crossing and passed into my final country: Serbia. I entered at Bačka Palanka, or should I say: Бачка Паланка. I was now in Cyrillic alphabet territory, which I was completely unprepared for. Suddenly, following street signs was nigh impossible and my electronic maps only had the place names in Cyrillic.

Serbia was an instant culture shock. Although the countries had been getting less prosperous as I headed east, and some villages in Croatia were looking a bit poor, Serbia was a whole different level. The cars were worn and blowing smoke and people looked impoverished.

I went to a cash machine to get some Serbian money. This also proved difficult, because I had no idea of the currency or its value. I jabbed a button and it gave me two 1000 dinar notes. This seemed unusably large, so I went to the bank and got it split into smaller notes. The women smiled, and no wonder, it was actually about 16 Euros worth.

There was a nice bike path from the town, but it only lasted for a kilometre and then I was thrust onto a busy road with no space. The drivers were not accommodating.

Eventually a farm track left highway 12, and I followed it along the banks of the river to Novi Sad. The city itself had good cycle paths. I crossed the Danube near the centre of NS on one of the bridges built after Nato destroyed the previous ones.

The traffic was threatening, the cycling was very stressful and I hated it. I swore never to return to Novi Sad.

I made it 16kms to the town of Sremski Karlovci. I found the nearby camping ground on a map where it was listed as "alpine hut". Damnit! There was only one other couple at the Eco Camping Fruska gora, so I had it mostly to myself. I wandered back to a small village shop where I bought some tins of goulash and cooked them on my stove using the alcohol I bought in Austria. The stove didn't explode, so I consider that a success.

On Friday, I got up and - despite my vow to never return to Novi Sad - I walked back to the village and caught a bus to the city.

Novi Sad is really quite pretty, although it has a lot of ugly apartment blocks. I enjoyed the museum, which had some interesting archaeological remains. 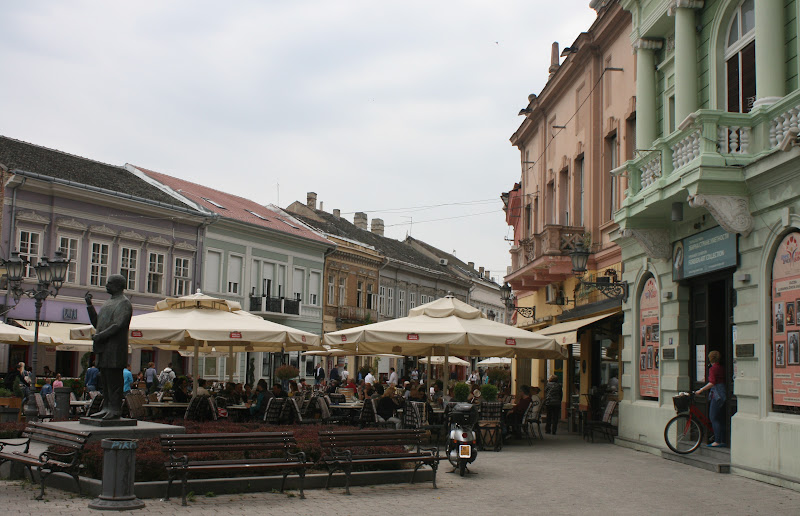 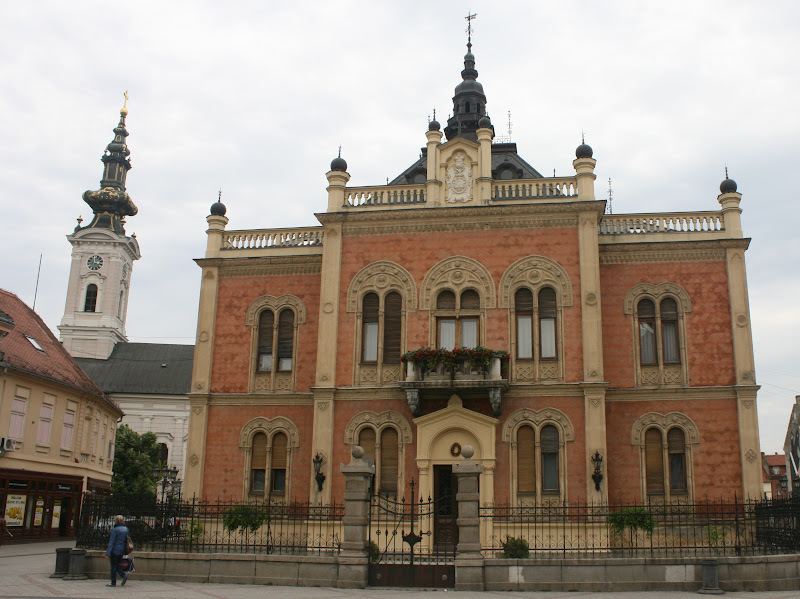 I crossed the bridge to the Petrovaradin Fortress. The Turks held it for 150 years, but the Austrians reclaimed it. Their army, outnumbered 2 to 1, defeated the Turks in a battle at the fortress in 1716. 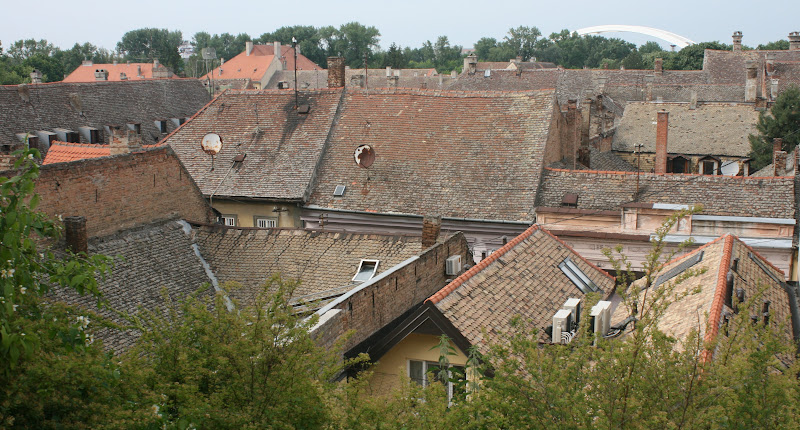 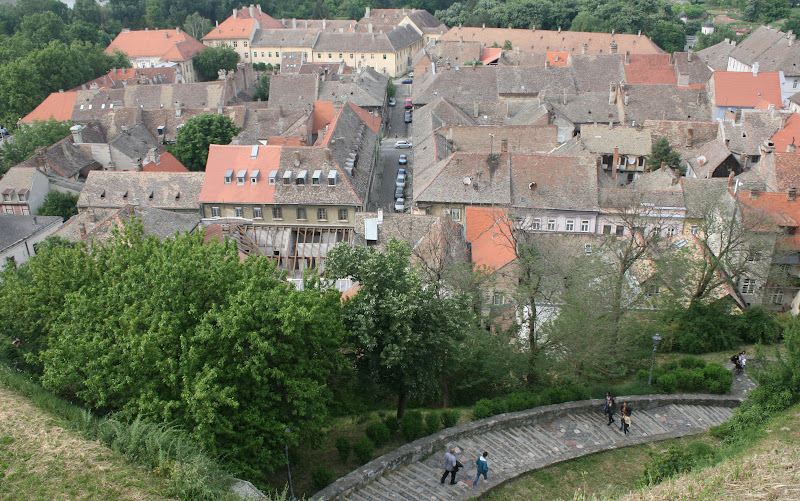